Released on December 22, 2009, Paranormal Entity is just another film in the long string of mockbusters that have been haunting Hollywood. It is a direct-to-dvd release by The Asylum, the company responsible for such modern day classics like AVH: Alien vs Hunter, Transmorphers, Transmorphers: Fall of Man, 100 Million BC, and The Day the Earth Stopped. 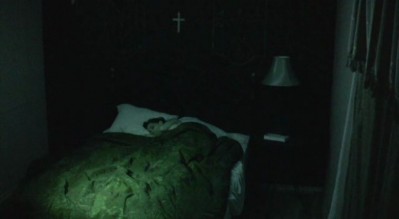 Ok, sis, I made sure that your bed is fully in frame. I also took the liberty of making sure that the gigantic cross on your wall is visible even at night. Sleep tight!

Most of the movies that The Asylum is “inspired” by have budgets that are through the roof. But what happens when you make a low budget movie based on a low budget movie? Surprisingly, the result isn’t half bad.

At the advice of a paranormal expert, the Finleys are told to document the activity that takes place in their house. The son, Thomas sets up four inexpensive night vision cameras to monitor the entire house. He puts one camera in the living room, one camera in his mother Cindy’s room, and one camera in sister Samantha’s room. He carries the last one with him at all times (At around $400 apiece, this felt like a better home monitoring investment than Micah’s $4000 investment in a single camera in Paranormal Activity. Point goes to PE for believability!). 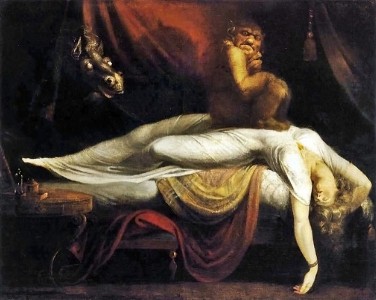 In John Fuseli's The Nightmare (1781), an incubus sits on a young maiden's chest as the mare pokes its demonic head in on the left. This is neither a screenshot from the movie, nor is this a photo of the band Incubus.

Paranormal Entity wastes no time at all as almost every night “documented” is filled with some rather spooky events. Certainly a lot of the spooks are inspired by Paranormal Activity but Paranormal Entity seems to put a genuinely original and scary twist to almost every situation. How do you make baby powder footprints made by an invisible beast scarier? Put them on the ceiling. And don’t make them out of baby powder. Make the foot prints out of the dead father’s ashes.

As the haunting escalates, it is clear the spirit wants nothing to do with Thomas. The ghost mostly has an interest in the mother and the sister. In time, viewers discover that the ghost wants Samantha. . . sexually. That’s right, Samantha is haunted by a Maron. A nightmare (in the absolutely traditional definition). An incubus. I like the fact that the demon is identified and classified. In Paranormal Activity, the demon is just “a demon” and aside from the generic and predictable desire to claim souls, the demon in Paranormal Entity has a far more sinister motive. Rape first, then steal souls.  Creepy.

Truth be told, Paranormal Entity would be as good of a movie as Paranormal Activity if it wasn’t foiled by performances of Erin Marie Hogan and Fia Perera. Both women completely overact their roles and break the fourth wall on more than one occasion. The acting of Shane van Dyke (who also directed the film) is more than passable and it’s unfortunate that he chose to not show his face at all on film.

Incredibly attractive. Willing to take off her top. Overacts. Clearly she's a graduate of the Denise Richards school of acting.

In the end, Paranormal Entity has more than its fair share of genuinely scary moments as it blends the video styling of The Blair Witch Project with the story of Paranormal Activity. It feels more like a platform to display the gorgeous Erin Marie Hogan, as she is almost always either in bra and panties, or she’s seen in a very low cut shirt.