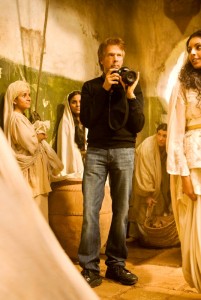 Jerry Bruckheimer has the magic producer’s touch, weaving gold from a stilted script about a group of bar room dancing girls and – most impressively – a Disneyland park attraction. But his approach and support of the Prince of Persia video game license has many, including him, both declaring an end to the two medium’s low rate of transitive quality and a new era for both in the not so distant future. In a recent interview with HeyUGuys, Bruckheimer discussed the process of attraction and adaptation of video game properties.

“We’ve kept some of the action and the cool stuff they did with the game. We kept as many of the characters as we could. But it is like a book. You never get those as close to the film. It’s a movie, not literature. You are constantly changing things,” said Bruckheimer, making effort to mention the fans, “They are important to us and you hope they will show up but you can’t count on them as you never know. Kids who are playing the game might not be by the time the movie comes out. You try and make a film that will entertain with really interesting characters and themes. If you do that, then everybody comes. If you just rely on the gamers then you are missing a whole market out there.”

When asked why he decided to go the video game route now, he replied, “I really believe in the next 10 years you won’t be able to tell the difference between movies and games. Games will be so realistic. They are a form of storytelling and we love to tell stories in movies and on television. We are about to actively seek some executives. Hopefully in the next six months we’ll get started.”

You agree with Bruckheimer, E-Gs? Will the Video Game experience be visually equal to films in 10 years, less/more? Predict for yourselves below!

One thought on “Bruckheimer: Games to Look Identical to Movies in a Decade”