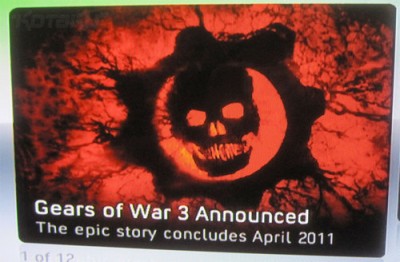 Surprising a single gamer deep in the Nebraskan wilderness, an accidental Xbox Live banner release has revealed the presence and impending release of Gears of War 3. Obviously being the “new game” to be revealed on Jimmy Fallon by Cliff “Biceps” Bleszinski, the banner mentions an April 2011 release. No other information has been revealed, but expect a teaser trailer, at least, this coming Monday.