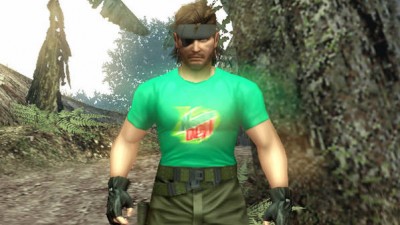 Snake: totally does the Dew.

In-game advertisements has usually been the bane of many gamer’s existence, but Kojima Productions has always had a sense of humor about the proceedings. From majorly featuring an iPod in Guns of the Patriots, to the recent reveal of information on Peace Walker‘s advertisements, lead designer Hideo Kojima has stated that the campaigns are always meant as grain of salt ventures that usually attempt to surprise players first and foremost.

“Regarding the collaborations, I have one reason for doing them,” wrote Kojima via Twitter message, “It’s because I want to surprise the players. If the surprise and freshness were lost, I would stop the collaborations. It’s different from Hollywood-style merchandizing.”

Does the intent and implementation of in-game ads change your opinion of them? Want kind of humorous ads would you WANT to see? Comment below, E-Gs!