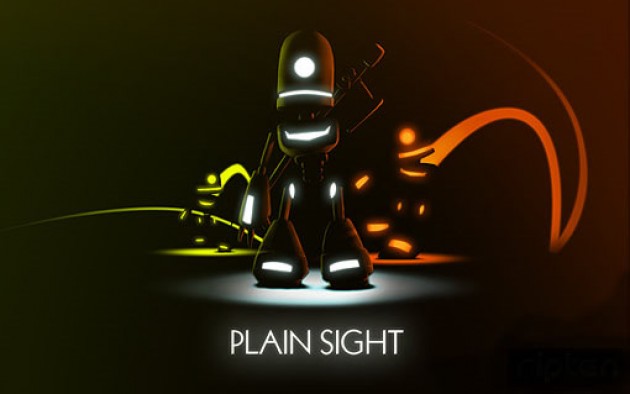 Plain Sight is an odd little game with an odd little name. As far as I can tell the naming of this game is completely random. Last time I checked ninja robots dashing around giant celestial cassette tapes and pocket watches didn’t have any particular connection with the plain or the visible. 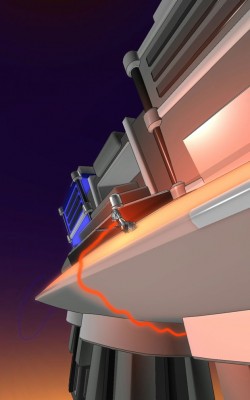 The game is made by indie studio Beatnik Games. It is a multiplayer-only game available on Steam and Direct2Drive for $10. The object of the game is to gather points by killing enemy players. Rather than using a conventional Kill/Death ratio system, the game awards point multipliers for each successive kill. But these points are immediately lost on death. To avoid losing the spoils of your hard earned mechanized warfare, you have to self destruct in a giant ball of energy. This creates a wonderful risk/reward situation. You want to get as long of a kill streak as possible, but every second that passes without banking the points by self destruction you risk losing everything at the hands of another player.

These points aren’t just for bragging rights either. They can be used to purchase upgrades to attack, defense and mobility abilities. At the start of each match everyone is on an even playing field as all the upgrades are reset and all the points lost. You get to re-spec your robot ninja with every new match, encouraging experimentation.

Your robot is equipped with a single weapon, a long katana. The katana can also get boosts like a fire coating; these are picked up from special bonus stars that appear around the level. There’s not much in the way of diversity in the combat, however as the player only has one attack. By holding the left mouse button the player can charge up and dash at incredible speed and length. Should you be lucky enough to hit anyone with this dash ability they will be instantly killed. Aiding you in this is a very basic and poorly implemented lock on system. I say poor because exactly who you lock on to is often anyone’s guess.

In addition the act of banking points through self destruction creates a sphere of lethal energy around you that dissipates after a few seconds. The size of this sphere is determined by how much you’ve chosen to upgrade it. If another player was dashing towards you as you activated the self destruct sequence, they would be fried on contact with the energy sphere. This awards extra points. 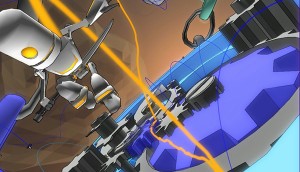 The character design is identical for every player, but the action moves so quickly that you'll rarely notice or care.

The major feature of the gameplay however is the level design. Much like Super Mario Galaxy; gravity plays a big part in the levels of this game. The design itself varies from the inner workings and gears of a pocket watch, to castles placed on opposite tips of what very much calls to mind how a planet would look if it took the shape of freshly finished apple. The levels are floating in empty space, and as the player jumps and dashes across it your ninja robot will be pulled towards the center of gravity. But since the objects are pretty much never completely round; this creates a dizzying sling shot effect making the character and camera perform feats of acrobatics only an Olympic performer could match.

The effect this has on the camera and the sense of control is both Plain Sight’s greatest assent and biggest fault. If you’re a gamer accustomed to extremely fast moving action and frantic camera movement then you’ll be able to wipe the floor with your virtual competition. But on the other hand, if you’re used to more slow and methodical games, you probably won’t enjoy this one. The action got so crazy at times that my roommate kept asking me why I was “unforgivingly torturing my mouse.” Not only does the camera move quickly on its own during these (highly frequent) moments, but in order to have any chance of winning at all, you have to constantly correct it.

Graphically the game is clean and serene. The levels are made up of simple geometry with clean and crisp edges and a smooth glow. As you hit any particular piece of this geometry it lights up under your feet to whatever color you’re represented as (mostly blue). It should be easy to see why this art style is so appealing by the images presented here; fresh and welcoming to the eyes. The music and sound effects ingame isn’t anything to write home about I’m afraid. But the menu features a smooth, calming and sophisticated jazz track that fits right in. One could only wish that such attention was paid to the ingame music. 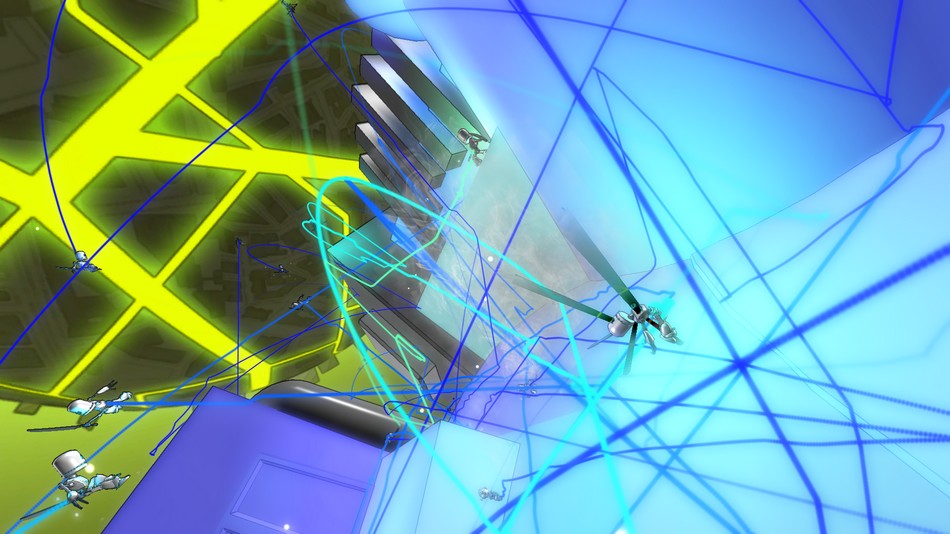 Besides just looking cool, the trailing energy lines help opposing players figure out where you are.

Servers are easy to find and although there is little to choose from, the four basic game modes will keep you entertained long past the dollar-to-playtime ratio has been satisfied. For now there are enough active players to support a healthy number of servers (dedicated and otherwise). But although this game can entertain for hours, it is not the sort of game you will stick with for months.

Plain Sight isn’t for everyone. While it’s lacking in some departments and mediocre in others, what it does provide gamers is a new and fresh style of gameplay and a risk/reward system that will get your blood pumping. But get this while it’s hot, as it is a multiplayer-only title and I fear the servers won’t be as populated in a few months.

One thought on “Plain Sight Review”