Setting out on the path forged by its predecessors, Super Street Fighter IV features many improvements over last year’s model, but is it worth the upgrade?

Anyone who has played the plethora of updates for the second and third installments in the series will know what to expect from Super Street Fighter IV.  Gameplay-wise, it’s almost identical to the original title, featuring the tight controls and classic 2D plane fighting that made the series great.  The things that set it apart, however, are the things that make it worth both your time and money. 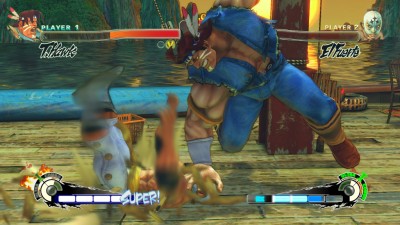 Ass kickery of this magnitude is commonplace in SSFIV.

The first thing fans will appreciate is the inclusion of 10 extra fighters.  Complementing 8 returning characters from past entries in the franchise and the Final Fight series are two original characters; the Taekwondo fighter, Juri, and the Turkish oil wrestler, Hakan.  It will also please many to hear that all 35 characters are unlocked and available for play right from the beginning, but multiple completions are required to unlock extra colors and taunts.  The game also sees the triumphant return of the car smashing and barrel breaking bonus stages and ‘Rival Battles.’

Also improved are the Ultra Combos in that each character now has two of them, though only one can be assigned to a character at any given time.  As with the originals, the Ultra Combos provide losing players a small window of opportunity when they’re close to death, with execution being simple enough to allow newer players a chance to see the dazzling animated combos. 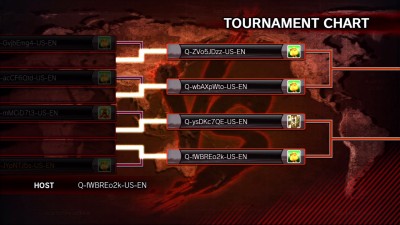 The online mode has also been tweaked for the better.  New modes include Team Battles with up to 8 players, a way to capture and save Replays of matches, and the ‘Endless Battle’ mode which makes matchmaking quick and painless with a lobby of players.  Capcom has also promised a Tournament Mode to be released as DLC on June 15th.

Graphically, Super Street Fighter IV remains much the same apart from the opening cutscene, which utilizes a pencil stroke effect rather than paint splatters.  Character cutscenes in arcade mode are, unfortunately, told with largely static images, and the voice acting is hit & miss, although the game includes the original Japanese voiceovers as an option.

Super Street Fighter IV is a substantial upgrade, and at the bargain price of 40 dollars, fighting fans shouldn’t hesitate to purchase.  Even those who bought the original Street Fighter IV should entertain the notion because the larger roster of characters and improved online modes make for a much more enjoyable experience.  For those who didn’t, there’s never been a better time to get into the reboot of one of gaming’s most prolific series.