A long-time informal measure of accomplishment, Blizzard has finally brought the EPEEN into official light. The “Equipment Potency EquivalencE Number” allows for gamer’s gear l33tness to be prominently and obviously expressed with a vertical blue bar that grows with added badassery. Players with the thickest and most manly EPEEN meters will allow players the glory of segregation in Blizzard’s new Player Potency Tiers, will place characters in the best server for their ability, eventually narrowing down the competition to the players with the least amount of real life obligations. Binky, the mechano-rooster, is also being introduced as a non-combat pet. 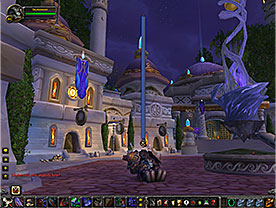 3 thoughts on “World of Warcraft Grows An EPEEN”