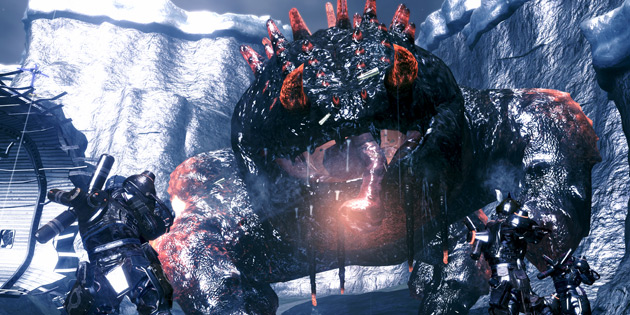 For the followup to a B-list hit, Lost Planet 2 sure did garner more than its fair share of hype. The demos performed remarkably well, and the game launched a rather sexy advertising campaign. But what’s it like for those of us who took a copy of Lost Planet 2 home?

Well, for the most part, Lost Planet 2 plays an awful lot like its predecessor, Lost Planet. The controls are nearly identical. The environment is changed up from the frozen tundras to jungles and deserts. The graphics have been prettied up for the consoles. And this time around, you can now play with 3 other friends online.

It’s a third person action shooter where you run, gun, jump, and grapple your way through rough terrain and giant bugs called Akrids on the planet of EDN III. You fight for survival  by collecting the thermal energy from your fallen foes. Sounds wonderful, right?

It was 100% unplayable to me. The game keeps freezing.

The ice might have melted but it's still freezing in there! BOOM!

After doing a brief Google search, it seems I’m not the only one who is suffering from such a problem and it’s hitting a minority of players on both Xbox 360 and Playstation 3. Personally, I was playing on a PS3 fat, 40 gig model. The game would freeze constantly. It would freeze when I’d finish a level and it would switch to a cutscene. It would freeze when I would start a level. It would freeze if there was too much action on screen. And if that wasn’t enough, it even froze during moments of inaction when I was trying to match up with other players to enjoy the main campaign.

At first, I thought it was the disc. Checked the disc. Disc was clean.

Then I thought it might have been cooling. I regularly clean my PS3. Blasted it with some air. Same result. Frozen screen.

Then I thought it might have been from playing online. Disconnected my PS3 from the internet, and tried to play without other players. Frozen.

I tried other games in my library. None of them froze.

So what do I think of Lost Planet 2 so far?

Graphically, it looks fantastic. The acting is terrible (as to be expected from a Capcom game). The co-op pairing is equally bad. I was constantly paired with people from the other side of the planet. Nothing against anyone from the other side of the planet. I’m just highly doubtful that we share a low ping on the same Capcom servers. The poor pairing is an absolute shame considering this is the same company who made Resident Evil 5 which had fantastic co-op pairing.

I was looking forward to some good old fashioned co-op goodness. I guess I'll have to wait a while.

And that’s all I can say about it.

That and, if you buy Lost Planet 2 without renting it first, you might be throwing $60 out the window because you’re running a gamble as to whether or not the game will work at all. Most gamers aren’t experiencing any issues. But the few who are experiencing freezing are absolutely crippled by it.

Will Capcom patch it to work in the future? I certainly hope so. But this type of business activity doesn’t exactly make me happy. Releasing bugged games to the public at launch is something that PC gaming has been doing for years. Now that consoles are internet-capable, it’s sad to see this trend is being passed on. I miss the days of games being released after more strenuous testing.

Sadly, for now I have to put Lost Planet 2 aside. There are too many other games that I could be playing and reviewing that are at least functional. It’s a shame too, because despite Lost Planet’s less-than-stellar reputation, I was still really looking forward to playing the game. I absolutely enjoyed the first and I was looking forward to more Akrid killing goodness.

For now, the review for Lost Planet 2 will have to be shelved indefinitely unless another brave soul on my staff will step forward to run the gauntlet. I’ll revisit the idea of playing it again when it’s ported over the PC sometime in the fall of 2010.