This is the third part of the Motion Gaming series. Part 1 focuses on Sony’s answer to Motion Gaming, the Playstation Move. Part 2 takes a closer look at Microsoft’s Project Natal. Part 3; which you’ll find below, will look to Nintendo and their contributions to the motion gaming genre, both past, present and future. And part 4 will look at all three in an effort to compare and predict the outcome of the motion wars, as well as try and imagine what motion gaming on a whole will look like next generation and beyond.

The Nintendo Wii has been around for a while, four long years in fact. And because of that, its functionality isn’t just well known to all gamers, but it is known to anyone not living in a cave. It should come as no surprise that the bulk of this article will focus on the Wii Remote (Wiimote) and its motion sensing capabilities. That said the newcomer Wii MotionPlus will also get a little analysis, and let’s not forget the lovable Nunchuk.

The Wiimote is a nifty little device. It features a three-axis accelerometer for sensing of left-right and up-down movements, allowing for almost full motion tracking. I say almost because knowing the exact position of the Wiimote is something it cannot do, and it also cannot detect twists of the wrist. This has resulted in the majority of games using the infamous “waggle” controls that require the user to waggle the Wiimote up and down or left and right for a set amount of repetitions. Rarely does this arbitrary movement represent the action on screen, if ever. Nintendo has however offered a solution to this problem however, something I’ll get back to a bit later.

The Wiimote also features an infrared (IR) sensor that captures lights from the infrared sensor bar the Wii comes with, this bar is usually placed on top of or right below the TV. Used for pointing accuracy, the IR sensor allows for precise aiming, whether to navigate menus or shoot monsters. The reason the sensory bar is needed is because gamers today own mostly LCD or Plasma televisions, which regular light gun devices won’t work with. The IR bar however has a multitude of infrared lights, providing the sensor in the Wiimote with stable positioning data. A problem with relying on IR light from the sensor bar, however, are that other sources of IR light can cause a significant amount of disturbance; keep those candles away from the TV. 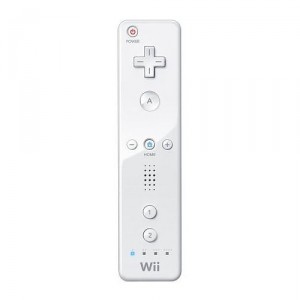 The IR sensor can also be used to calculate the distance of the Wiimote from the sensor bar. This allows the Wii CPU to calculate the approximate position of the Wiimote in 3D space. Games can utilize this functionality to detect forward and backward movement. Though this is still a limited and rarely used feature; as the movement has to be slow and steady to be detected, and the Wiimote constantly has to be pointed directly toward the sensor bar.

For player feedback the Wiimote comes equipped with the now obligatory rumble motor, but also adds an interesting little innovation: a small speaker. The speaker is often used to mimic a phone or to give different audio effects in conjunction with the TV speakers or sound system. This, if used right, has proved to add a great deal of immersion to certain games. It has however also been used to its own discredit by some developers, creating highly frustrating repetitions of horrendous sound effects. Luckily for such situations the Wiimote speaker can have its volume turned down or completely muted if the player wishes.

The Wiimote also features a number of the classic Nintendo controller buttons (A and B). All positioned at strategic places to allow for multiple playstyles, like holding the Wiimote as a remote (vertically), or as a classic game controller (horizontally). To accommodate these different play styles Nintendo has released a couple plastic accessories, allowing you to slot the Wiimote into different shapes to become more intuitive for certain games. Most notably there is the Wii Wheel and Wii Zapper, the first being used in racing games and the second in First Person or On Rail Shooters. 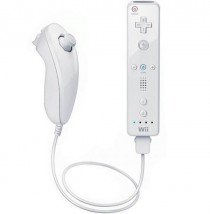 The Nunchuk goes hand in hand with the Wiimote, literally. It’s a supplemental controller attached to the Wiimote via 4 feet cord. This configuration makes it look like a nunchaku, which is no doubt where it got its name. As I mentioned in Part 1 of this series, this combination of motion device and supplemental controller has proven to work quite well, which in part is the reason Sony decided to mimic this functionality with its Move Navigation controller.

Unlike Sony’s Navigation controller however, the Nunchuk also has its own motion sensing capabilities, featuring a three-axis accelerometer. Though that is where the similarities with the big brother Wiimote ends, it has no IR sensor, rumble motor or microphone. It does however help the player navigate, featuring a very basic analog stick at its top. And also it features an additional trigger and action button, C and Z.

The Wii MotionPlus controller add-on was announced by Nintendo at E3 2008 in response to the piling criticism it had gotten for the lackluster motion control it had with the original Wiimote. It adds something called a tuning fork gyroscope, which basically allows for tilt detection. Meaning that when the MotionPlus add-on is attached; full motion sensing capabilities are unlocked. 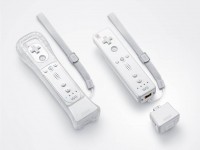 The add-on attaches to the bottom of the Wiimote where the cord to the nunchuk would usually go. No worries however as the MotionPlus is equipped with the very same outlet, effectively working as a tiny bridge between the Nunchuk and the Wiimote. It also comes with an elongated rubber sleeve, which becomes essential if you don’t want the MotionPlus flying across the room during one of the more hefty Wii Sports Resort sword matches.

So far Wii MotionPlus hasn’t been used in all that many games, having a total count of supporting games of 19, some yet to be released. This isn’t so bad compared to the competition, but the competition hasn’t released their products yet and the Wii MotionPlus has been out for almost a year. The few games that do use it however, use it well. The experience is worlds apart from using just the Wiimote. As of May 9th the Wii MotionPlus will come packed in with every new Wii sold. This hopefully, will give developers a greater incentive to develop new games for it.

Nintendo’s entry in the motion wars seems to be a bit primitive compared to the competition, but it’s important to remember that it’s a device that launched in November 2006 and has been on the market for close to 4 years, and will have been when Sony and Microsoft launch their answers to motion gaming. Nintendo is showing no intention of slowing down however, constantly unveiling new and interesting peripherals for the star console of this generation. And while few of them can be called motion gaming, it gives hope for some sort of motion sensing functionality upgrade in the future.

Nintendo showed some balls in 2006 and launched a product that by today’s standards would be considered incomplete. Yet in 2006 it was looked upon and talked about with astonishment and wonder, and Nintendo reaped the benefits and ultimately secured their spot as the winner of the console wars for this generation. Now rumors are afloat about their next big announcement, will it be a Wii HD? A new twist on motion gaming? Or is the Vitality Sensor the last accessory of the Nintendo Wii? Come back next week for the final entry in this series where I’ll speculate on and compare all the possible outcomes of the motion gaming struggle between Nintendo, Microsoft and Sony.