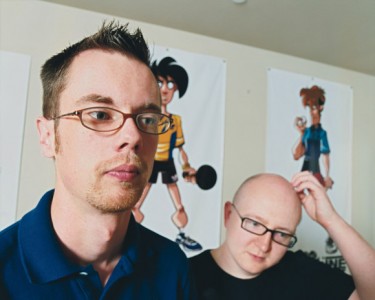 Time magazine has managed to make some serious headlines with the recent video game market, from named Natal one of the best technological inventions of last year, to the release of this year’s Time’s (100 People Who Affect our World). Among the usual selections of politicians and CEOs were two elder-geeks that started their career drawing a webcomic nearly 12 years ago. Jerry Holkins and Mike Krahulik, founders of Penny Arcade, were cited by the magazine for their Child’s Play charity and Penny Arcade Expo conventions.

“Krahulik and Holkins have become the tastemakers, and conscience, of an industry the size of Hollywood.” read the feature, “But for all their success, they are almost compulsively self-deprecating, and they give all the credit to their fans. You can’t put a label on them. Labels smack of hype, and Penny Arcade doesn’t do hype.”

“We don’t think about it,” Holkins says. “We specifically don’t try to figure out what we are.” Krahulik adds, deadpan: “Except rad.”