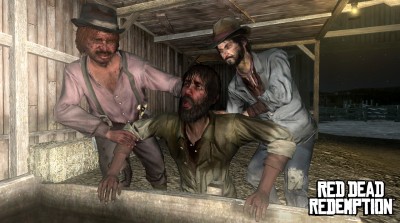 Irish, enjoying a night cap with the help of two nice gentlemen

Even in the Old West, Rockstar can’t seem to make a game that doesn’t offend people. The Irish Herald isn’t happy with the representation of an Irish character within the game (named, appropriately enough, “Irish”), despite its love for the game as a whole. They article claims, among other things, that the inclusion of the character “sours the launch” for any Irish gamers.

“The stereotype of the drunken Paddy will again be taken advantage of, as the game’s town drunk is called ‘Irish.'” reads the article.

Offensive or harmless? Sober up and give us your thoughts below!

One thought on “Red Dead Redemption Gets Irished Up”