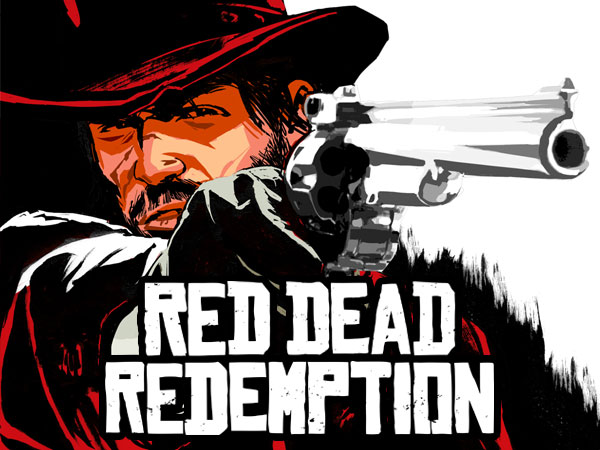 Last week, I wrote a list of the Top 10 Video Game Westerns. This week, after spending many an hour in the sprawling game world of Rockstar San Diego’s Red Dead Redemption, I must humbly amend that list to reflect that this game is the best video game Western ever made.

Sorry to spoil the suspense; usually it’s customary to wait until the final paragraph to deliver the verdict, but anyone who is remotely in touch with the world of gaming has heard of, read, or watched dozens of stellar reviews for Red Dead Redemption.  This review will be no exception. 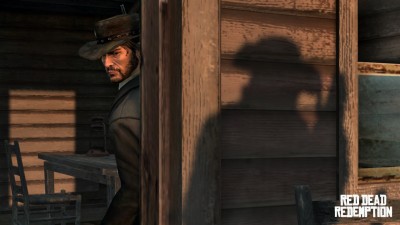 The atmosphere is what really sells RDR.

Red Dead Redemption puts you in the boots & spurs of John Marston, a former outlaw now under the thumb of the US Federal Government.  In order to protect his family and himself, Marston must do dirty work for the government and, seemingly, every other citizen of New Austin.  On the way, he encounters dozens of interesting, believable and often times sympathetic characters.  The story and character development are primarily relayed through lengthy, but never tedious, cutscenes, and through dialogue that takes place during travel by horseback, train, or stagecoach.

The pacing of the game is sublime, with Marston’s troubled past and true motives being slowly revealed with each interaction, and new characters receive the time and attention needed to make the player care about them.  The plot never drags on, but it never feels rushed, either.  The expected top-tier Rockstar dialogue returns, and it’s bolstered by realistic facial animations and outstanding voice work.

Progression is broken up into missions for different people, similar to the Grand Theft Auto series, and while the main storyline gets top billing, the side quests are equally enjoyable and well written.  Objectives are varied enough that only the marathon players will feel the gnaw of repetition.  Should you be one of these players, New Austin is packed to the brim with optional mini-games and other diversions.  These range from saving women from being kidnapped, breaking wild horses, playing poker & blackjack, and dozens more.  The game deftly handles its plethora of play options by gradually introducing new elements, so it never feels overwhelming. 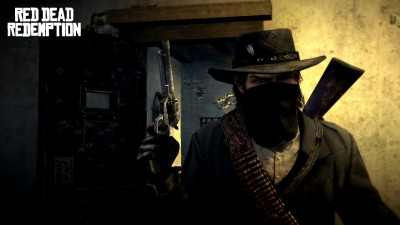 Donning a bandana allows you to do evil deeds without affecting your Honor or Fame rating.

Gameplay is solid both on foot and on horseback.  An arsenal of deadly weapons is at your disposal, all of which feel appropriately powered, and the targeting system can be picked up after the first few gunfights,  The ‘Dead Eye’ is your standard slow-motion fare, and it’s especially useful when fending off a small army.  Melee combat is, sadly, lacking in both style and substance, but you’ll rarely have to let your fists do the talking.  The cover system is intuitive but not flawless, and combat on horseback or when riding shotgun on a stagecoach is handled well.  Essentially, the game provides all the resources to be deadly, and the rest is up to the player.

Navigating the massive world of Red Dead Redemption is no small feat.  You’ll spend most of your time on horseback, and players will inevitably become attached to their horse, whose stats increase as the bond between rider and mount grows stronger.  Stagecoaches can be used to quick travel to previously visited locations, and trains can be used to travel from town to town. Once locations are discovered, John can thankfully fast travel to any point on the map by using his campsites. It’s an odd, and somewhat illogical method of travel, but it beats galloping everywhere across the map.

The only thing that is disappointing is the fact that John Marston sinks like a rock when he’s in anything but a few inches of water.  This restriction was put in place to cordon off the southern half of the map (based on Mexico) until the few bridges are completed, but it feels out of place in a game that allows you to do so much. 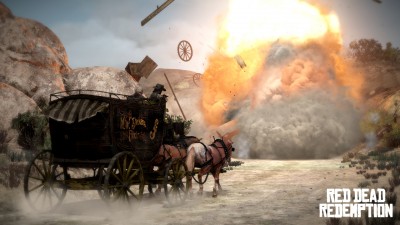 Explosions are delightful, sending splinters of wood and debris in all directions.

The single player mode could last you anywhere from 20 to 200 hours depending on how often you quick travel and how engrossed you become in the game world.  In addition to that, the multiplayer options are substantial to say the least, with cooperative and competitive modes and the ‘Posse’ system, which allows you and a group of friends to stay together across multiple game modes.

Visually, regardless of which machine you choose to play it on, Red Dead Redemption is nothing short of breathtaking.  Taking into account the scope of the game, the occasional pop-in or slow-down is excusable, and everything usually runs at a solid framerate.  The environments range from Monument Valley-inspired expanses to snowy peaks and everything in between.  The weather effects are particularly excellent, with the stars in the sky glimmering during the night and puddles of water being found on the roads after a heavy rain.  As previously mentioned, the facial animations do a lot to lend the characters humanity, and this extends to the Euphoria engine-based body animations, which are as fun as ever, albeit occasionally glitchy.  The way an outlaw falls off his horse after a well-aimed shot to the head is nothing short of poetic.

If you have even the slightest interest in Westerns, buy this game.  It has film references galore, looks and plays beautifully, and, as previously stated, is the best video game Western out there.  It has a few flaws, yes, but it’s the first game to approach perfection in 2010.