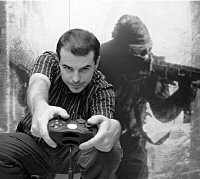 Clint Hocking has managed to craft a pretty impressive resume in just nine years. Beginning work as a writer and game designer on the original Splinter Cell and its sequel Chaos Theory. Hocking was then promoted to Lead Designer and Creative Director of 2008’s Far Cry 2. Even with all this to his name, Hocking recently posted his resignation from Ubisoft on his blog. No word yet on his future career moves, but its easy to consider the designer a worthwhile asset to whomever he signs on with next.

“…in my almost nine years here, I have shipped three games with over twelve million units sold through, and an average meta-critic of over 90%.” Hocking mused, “I’ve been very lucky to say the least.”