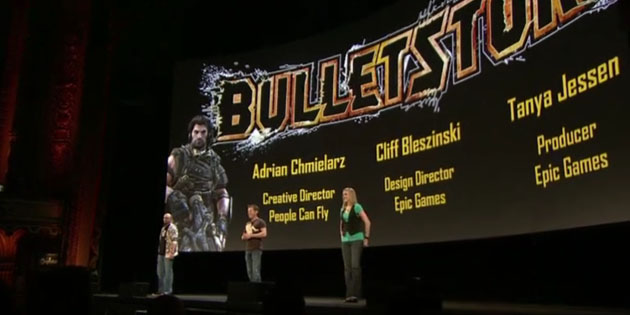 Cliff Bleszinki, design director at Epic Games, took the stage during the EA press conference and confirmed that Bulletstorm, the upcoming over-the-top first-person shooter by People Can Fly, will be available at retailers on the 22nd of February, 2011. He indicated that Bulletstorm will be an over-the-top experience that will allow players to kill with skill and play with enemies like a cat plays with a mouse and a fat boy plays with cake. The game was further likened to a “Blood Symphony”, where players act as the conductor with weapons as their instruments.

Gameplay footage was shown of the game, in which the player encountered destructible and changing environments and hordes of opponents. One of Bleszinski’s onstage partners explained that the game is built around a basic premise where players “do cool shit, unlock cool shit, and use it to do more cool shit” in a pulp-scifi environment.

One thought on “Bleszinski Shows Bulletstorm at EA Press Conference”