The Total War series from The Creative Assembly has been through a lot of changes in recent years.  There’s been ancient Rome, the medieval era (once again), and the colonial era.  However, through these games there was a progressive shift away from “old school, classic Total War.”  When I went behind closed doors with Mr. Kieran Brigden of Creative Assembly he was pleased to hear that I was quite familiar with Rome: Total War since the newest Total War game was going to be a shift back to “roots.”

I could probably write a short book about this closed-door look into Shogun 2: Total War.  There was so much content covered, so many questions answered, and I was surprised by how much Japanese history Kieran knew.  Yet, I digress; you all aren’t here for a history lesson, are you?  You want the delicious, deep-dish pizza with all the toppings (but no anchovies)!

For those who’ve played the Total War series since the beginning, you’d know that Shogun: Total War was the first game.  As such, the symbolism of going back to the roots of what Total War was about is echoed by the choice of doing a second Shogun game.  To Creative Assembly, Shogun 2 is going to be what the original Shogun game should have been.  “If we could go back and do it again, this is how we’d do it,” Kieran declared. 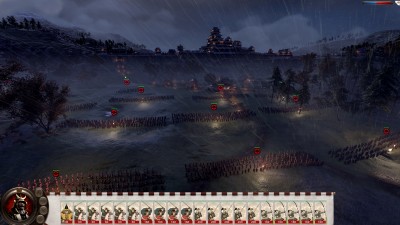 When I give the signal... unleash hell! Ok. Wrong movie!

Shogun 2 takes place in 1545 Feudal Japan, where nine clans make up warring states which are all led by individuals who want to be Shogun.  The Emperor of Japan is still considered to be a “God-like figure” during this time so you’re not trying to obtain that role.  Instead, the idea is that the Emperor will have no choice but to name you Shogun (basically the protector of Japan) if you defeat all the other clans and thus have the full army of Japan behind you.  All nine of the clans have different attributes.  For instance, one clan could be better on horseback while another is more skilled at archery.  Every single one of these clans is playable.

Now, one thing players will notice is that the game is more focused than recent versions.  You’re not going to start the game with a huge range of vision or a multitude of available cities.  Instead, every clan starts in a small zone where they are the only entity visible.  Kieran made it clear that the same epic size experienced in Empire: Total War would be retained; however, slightly reduced.  There is also going to be a return to family roots.  For instance, if you’ve played Rome: Total War, you’ll remember that your leader ages and eventually dies, only to pass on the torch to a family member.  It was confirmed in this meeting that the clan leader you start with will not be the one you finish the game with.  Additionally, each clan or faction leader will also have reputation.  This is part of the attempt to personalize your experience and help with your immersion into the world of Shogun 2.

Speaking of immersion, Creative Assembly is doing its best to ensure the artwork is top of the line in order to help keep you pulled into the game.  I saw many samples of the artwork that’s been put together and words can’t bring justice to just how beautiful it looks.  It took over a year for the art team to nail down the game’s original yet historically accurate appearance.  In fact, Creative Assembly even had to talk with lawyers and museum officials to make it known that the art for the game hadn’t been stolen.  The music is returning to earlier roots as well. Jeff van Dyck. who composed the music for the original Shogun: Total War and, most recently, for Medieval II: Total War is back for Shogun 2.  As an enormous fan of game music I can tell you that I’m excited to see what Jeff brings this go around. 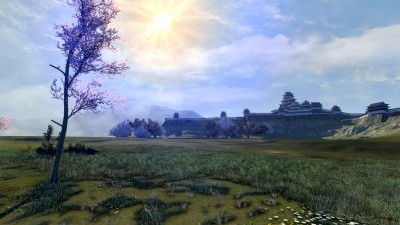 Each turn represents a season within the game. This is spring!

Meanwhile, the superb artwork doesn’t just end with painting.  There have been some serious graphical improvements.  It’s to the point of first person shooter visual fidelity now…and this is an RTS.  There are destruction states for objects and even water cascading off rooftops during a battle in the rain.  All objects are now physically integrated into the environment.  This means if you shoot some fire-arrows into the sky, the clouds will illuminate.  If you set fire to a house, the lighting will be apparent upon the surrounding area.  A given battle can now theoretically hold up to 56,000 units.  These units are now made up of eight unique parts instead of the four seen in Napoleon: Total War.  Oh, and each unit is now up to one-thousand polygons.  This graphical upgrade even extends into tree types, with eighty different handmade (not randomly generated) trees being spread throughout the game.  This game is only in early alpha and yet it looks absolutely stunning already.

Now let’s get into the nitty-gritty details of unit changes and battle mechanics.  Units!  There are now only thirty.  That’s right, only 30.  Three zero.  But, before your cork pops there’s a very good reason for this…it’s historically accurate!  Unless you want vampire ninjas running around the battlefield, it makes sense to have just thirty.  It’s also part of making the game simpler yet more complex at the same time.  Meanwhile, ‘rock, paper, scissors’ is now quite prevalent.  Unlike in Empire where you had all sorts of different classes of riflemen with minute stat differences, each unit in Shogun 2 is completely unique.  If you’ve played Rome, you’ll remember that spearmen destroyed horsemen.  The same principle applies in Shogun 2.  Remember agents?  Well, it used to be that different types of agents couldn’t really do anything to each other.  However, agents in Shogun 2 will all be able to impact one another in their own unique ways.

BOOM!  Siege warfare is now vital!  Unlike in Europe where castles had one gate and attackers would funnel in and feel the joy of oil pouring down upon them, Japanese castles have multiple entryways.  So, it’s up to you to decide which entries you want to attack…or defend.  These castles can also be upgraded to have up to five different levels that need to be breached to take control.  Think Helms Deep from Lord of the Rings: The Two Towers.  The castles will also be built in three different areas: coastal, flats, or into mountains…think Helms Deep!  Oops, already said that.  At the same time, naval warfare is in the game and much different from what you experienced in Empire.  These battles take place primarily along the coast in shallow water and are highly melee based.  This is just how naval battles were back in Feudal Japan.  However, it actually looks like it’s going to be a lot of fun.  There are twelve naval vessels in all so that should help add enough variety to make it quite enjoyable. 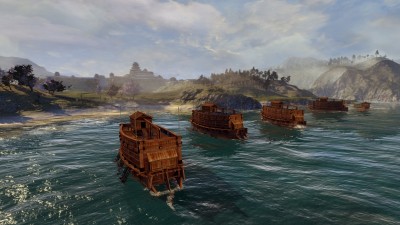 Naval warfare will take place along the coast.

Ok, are you all ready for the big one?  Night battles are back!  Not good enough?  Umm… unit upgrades are in!  Fire arrow upgrades for the win?!  That’s still not satisfactory for you?  Alright!  You win.  Hero units are in the game.  I can already hear the yells of “NoOoOoOo!!!”  I was going to do the same thing if the heroes in the game were made out to be fantastical.  Luckily for all of us they aren’t like that at all.  Think of heroes as extremely expensive, high-end versions of a given type of unit.  They may have a special move that only their group can do, but if they meet their rock in battle and they’re scissors… and even the rock isn’t a hero itself?  The non-hero units are either going to win, or severely cripple the hero.  It is important to note that hero units aren’t just the hero alone.  They have a group of powerful units with them.  Again, if the hero was alone it would be absurd to see one guy run around tearing things up.  However, there is a chance to see the hero unit within the hero group all alone!

HERO BATTLE TO THE DEATH!  That’s right.  If you have a hero unit in battle and the enemy has one too, they can actually meet alone and fight each other to the death.  If you win, the other side’s morale is pretty much destroyed and you will win the given battle… you best not be on the losing side though.  You can break up the fight if you want, but that’s just not honorable in my opinion!

Well, there you have it everyone.  The inside scoop on Shogun 2: Total War. Creative Assembly has bolstered its personnel numbers in recent years with 148 people now working in the studio compared to the 37 for Rome: Total War.  I can tell the increased manpower has paid off.  We can all expect to see this extremely promising game sometime in 2011.  If anyone has questions about the game that were not answered here, feel free to make a comment below.  I may just know the answer!