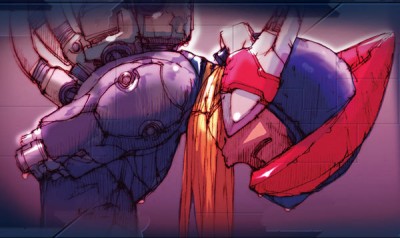 The designs are a little anime inspired, but work well.

Recently, there has been a resurgence of Mega Man love and I, for one, couldn’t be happier. Those who know me would say I might be a tad obsessed with the series but I say a Mega Man themed wedding is perfectly normal. That aside, my respect for the franchise has been dragged through the mud with its numerous useless incarnations, like Star Force and, to a lesser extent, ZX. Even the retro MM9 and MM10 had me severely disappointed and wanting more. Mega Man Zero, however, is a testament to the great things that can be done with the franchise while keeping true to the series roots and with all four games wrapped neatly together into one edible cartridge, there has never been a better time to give these spinoffs a try.

The collection spans the entire Zero series from 1 to 4. The story is set about 100 years after the end of the last Mega Man X adventure. Zero, our favorite effeminate swordsman, is suddenly awakened from his cryogenic slumber and enlisted to help a group of rebels fight against a government controlled organization trying to destroy all the Reploids, or “sentient robots”, in an attempt to keep them from ever going maverick, or “ape-shit insane”. From there, the series takes many twists and turns and creates a surprisingly interesting narrative that the Mega Man franchise has been traditionally lacking. The games also offers some dynamic characters that, dare I say it, will have you emotionally involved in their well-being.

The games operate much like a traditional 2D action adventure title. Unlike the more widely played Mega Man games, you do not select from a group of robot masters, instead you choose a mission objective from the home base and head out to complete it and defeat the boss that stands guard at the end of the level, so not that much is different from what you’re used to. That being said, the home base and overworld can be largely explored in your free time in all four games. You’ll want to take advantage of this feature because the many specialized weapons Zero can wield can all be leveled up through constant use. From a Rygar-inspired throwing shield to a whip style hook-shot, each game offers a new set of primary weapons for Zero to wield. Still, for the most part you’ll be using the tried and true sword and blaster combo. 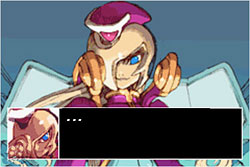 Hand drawn cutscenes add some polish to the game.

The battle mechanics are where these titles really shine. The swordplay is fast and fluid and when combined with the dash can result in some wicked attack patterns. The anime inspired art style lends itself very well to the overall flow of battles. For instance, if you’re fighting a stage’s boss and finish him off with a charge shot (Oh no, not a charge shot!) the battle will end with a spectacular explosion. Contrarily, if you opt to cut him down with your sword you’ll be rewarded with a slick visual of a bisected robot master as Zero stands triumph. Little touches like these are what makes the games battles feel unique and polished.

Now might be a good time to mention that these games are hard. I mean really hard. Like capping an oil spill hard, or explaining to your girlfriend that the “something blue” at the wedding could easily be Mega Man’s blaster and it would make throwing the bouquet much more exiting. Then again, it could just be described as Mega Man hard.

The enemies are unforgiving, the bosses are ruthless and sometimes you’ll begin to think that the other side of those bottomless pits are designed to be just a little farther away than you can physically jump. The difficulty ramps up on the first stage and stays there for pretty much all four versions. Don’t worry though; the killer difficulty can be reduced with the help of the adorable cyber elves strewn about the levels. These cuddly creatures can be gathered, loved and fed to gain access to extra health, defense, attack power, speed and all kinds of other little gifts that make killing bad guys a breeze. Sadly it requires you to devour their precious little souls and usually results in lower ranks on all the levels. But hey, who wants to get top rank when you can slaughter your enemies with ease? 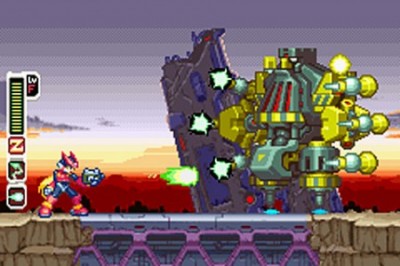 This may look easy, but the game is hard. Like frozen gummy bear hard.

As ports go, the Mega Man Zero Collection does an excellent job. The animations look beautiful on the DS, if not a little outdated (these are Gameboy Advance games) and like all the best DS titles, the touch screen is almost completely unused. The bosses are all interestingly designed and vary from tiny twin beetles to giant Turkish elephants and there is enough variations in each game to make them all feel new. The music is on par with the likes of MM2 and the hand drawn cut scenes are an extremely nice touch even after all these years. Extras include some special artwork, wallpapers and music. It’s mostly stuff that only hardcore fans will care about but there is one useful feature that lets you play through the whole series with all the Cyber Elf bonuses and power ups already unlocked which essentially makes you unstoppable. The addition is perfect for people who just want a pure action title or find the game itself too hard without the power boost.

Overall, the Mega Man Zero Collection offers 4 action-packed, exiting games that provide a challenge that will have any 2D Mega Man, Metroid or Castlevania fan frothing at the mouth for a comfortably low price. It captures the essence of what a Mega Man title should be while providing a slew of improvements upon the original formula. The unexpectedly good plot and fast-paced battles that carry across all four games will have you crying for more once you’re done, that is, if you can get past the disappearing platforms. What am I fighting foooooooor!