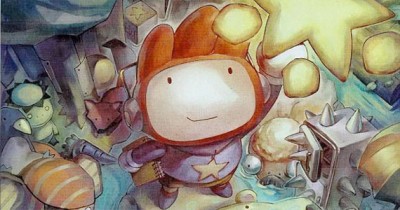 Maxwell’s back and more verbose than ever in 5th Cell’s follow-up to the critical darling Scribblenauts on the Nintendo DS. As you can probably tell with the title, the main new addition of Super Scribblenauts is the ability to add adjectives to the already exhaustive in-game dictionary to create some truly unseen cartoon creations to help you solve dozens of new puzzles. But just thousands of more word possibilities aren’t enough for the workaholics at 5th Cell, as more additions have been implemented to make Super Scribblenauts a more fluid and enjoyable experience.

While now having adjectives may not seem like that big of an advancement, the plethora of options demonstrated for us with just one level proved just how much mileage you could get out of a descriptor. The levels in Super Scribblenauts break down just as they have become, with a simple objective spelled out between the intrepid Maxwell and the stage-ending Starite. The adjectives you can employ aren’t just limited to the simple “BIG,” “LOUD,” or “LUMINESCENT” we all immediately think of, nor are you just limited to typing out a single adjective attached to a noun in order to get your point across. One of the most beloved points of the game’s E3 trailer was a “GENTLEMANLY RED RAPTOR” after all.

One of the levels shown to us had Max at the back of a long line (to get a copy of Super Scribblenauts, naturally) with only one copy left. The hint given was to appease each member of the line in front of us with an item their vocation or personality would enjoy. When in the hands of the developer, they deftly handed out a “SMOOTH-HANDLED AXE” to a fire-man looking fellow, a “SAD PAINTING” to a gothic looking chick, and an assortment of equally odd items to the remaining stand-ees. In my hands and, more appropriately, limited ability to think off the top of my head, I gave up on personalizing each item and just summoned an “IRRITATED RHINO” to maul through the crowd, which it did with gusto.

The genius of Super Scribblenauts is not simply the breadth of its vocabulary, but the simplicity of its implementation. Adjectives are applied to a base noun through very simple iconography. Colors, skins and the like are applied in a simple paint-over of the character model, while more representational objects like my “RUDE AIR HUMIDIFIER” showing an obvious base object with an added accessory, in this case a small air humidifier whose frame was shaped like that of a human butt. Such overlays ensure each creation has a bit of giggle-inducing oddity to it, all of which contributes to the existing Scribblenauts cartoon style. 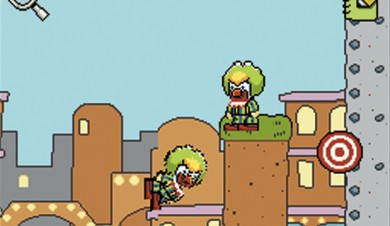 Those not impressed with the original Scribblenauts‘ sometimes awkward physics will be happy to know that the folks at 5th Cell have – quite clearly, they told us – have received the message, and have promised to have a much tweaked and improved engine come the game’s October launch. Maxwell can now be controlled with the DS buttons as well as stylus input, correcting another complaint found in most reviews of the original. Those brave enough to create their own sandbox levels will have an editor to do so this time around, and a hint system will also be in place to help along those not sure of what to do when faced with an “ANGRY CHEF” in one room and a “SUAVE TRAIN CONDUCTOR” in another.

Super Scribblenauts looks to be more of a beloved formula, simple levels setting up endless (and now descriptive) creativity. The tweaks to the finicky physics and Maxwell controls should ease the experience for those perturbed by the main character’s occasional headlong rushes into precarious stacks of objects. Either way, if you can find any words to describe the fun that’s possible in Super Scribblenauts, the folks at 5th Cell have already modeled it and attached it to a “PETULANT GRILLED CHEESE SANDWICH”.

Make sure to keep it at Elder-Geek for all the upcoming news and information on Super Scribblenauts before its October, 2010 release.

One thought on “Preview: Super Scribblenauts”