Author’s Note: Due to the logistics of trying to photograph myself and the horrid, ugly mug shots that followed, I will here by be represented by Heart Bear; my trusted friend and fellow pimp (note the glasses.) 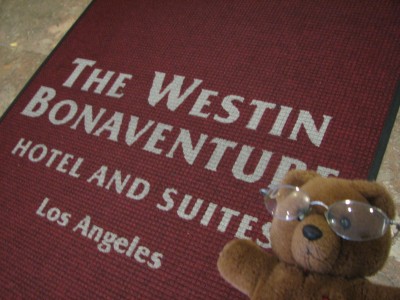 It was about half way down Figueroa Street when the drugs began to take hold. Few people realize just how potent the simplest combination of legal medicinals are, the thick-variety Robitussin and Maximum Strength Excedrin creating a symphony of muted sensations as they mixed with the six-style caffeine grab bag still running through my veins from that ill-advised convenience store stop. E3 was starting earlier and earlier, and given my location in nearby Orange County, I had both the fortune of being the first on the scene, and the misfortune of having to show up days in advance in order to be so. Due to this series of complicated events, I arrived at the steps of the Westin Bonaventure Hotel and Suites a mere 16 hours after my college graduation, wondering whether I really was this weak sauce, or that you really can get such a pleasant high from your medicine cabinet. A further twelve hours and three Lemon Drop martinis, a jager bomb and four (2 lime, 2 cherry) jello shots later, I had my answer. 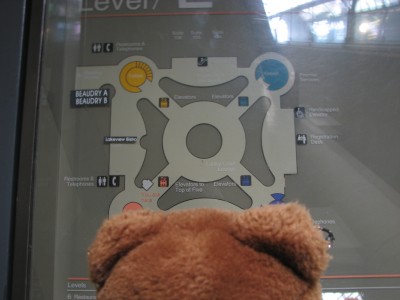 I suddenly wish I took that night course in architecture...

But I get ahead of myself. The Westin Bonaventure Hotel is a masterpiece, but to its credit, it doesn’t appear to be its fault. The

35-floored building looks less like it was designed, and more like it was poorly bolted in the bathroom to attach to the towel rack: a center pillar with four towers attached to the apex of each outside curve. Given the building’s size and layout, the design is sensible, considering it has its own mall. The lobby is a gigantic round-about with a lounge in its center, various shops and concierge-based services strewn about the perimeter. The first six floors are devoted to a mix of basic shopping and dining, with luggage retail outlets and eateries of various ethnicities. Subway is the only known commodity, the rest being interpretations on their archetypal Greek, Korean BBQ, Chinese Take-Out, and Brewery restaurants. 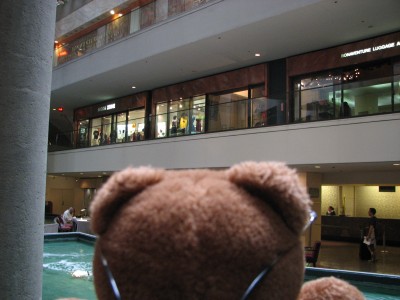 Finding your room feels like a condensed version of your first steps into an open-world game: the immediate scope of your environment being initially off-putting, but quickly becoming comfortable with some exploration. The suites are confined to each of the four towers, which are labeled with respective colors and shapes: Red Circle, Green Square, Yellow Diamond, and Blue Triangle; giving the experience a nice Lucky Charms kind of after-taste. My room was within the Blue Triangle tower, on the 11th floor, on what I would later find out was the Starwood’s Preferred Guests floor. 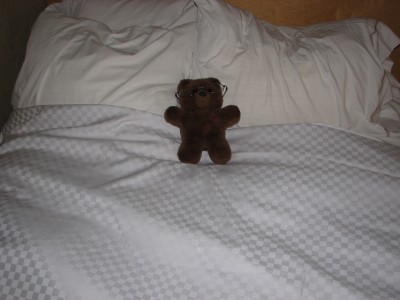 The suite in question was rather compact, but bearing enough of the required amenities to still feel fancy enough to justify whatever

This be mah suite

the cost was. The air-conditioner was a bit lazy, but given Westin’s famous beds, my hair could have been lit on fire and I’d still have one of my more pleasant naps. Plasma TV, high-end shower nozzle, and extremely comfortable bathrobe’s were the rest of the highlights. I set up shop on the room’s provided desk (only later would I be told that there were outlets attached to the desk lamp, my poor lappie going off and on battery power like the Energizer Bunny’s less ambitious half-brother) and got to work on the site, news stories won’t post two days late themselves. 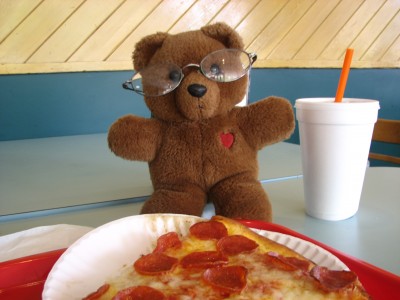 That be LA back there

Like any good frequent traveler, this entire experience has been mooched off of the travel benefits of a person much cooler than I, and I continue to thank my Aunt Gail for these kinds of things every time I don’t have to rent a room in a hostel when I leave town. But to keep myself from feeling too grateful, I took a few hours after arrival to explore the grounds, where I happily discovered the multitude of intriguing shops, and unhappily discovered their lack of weekend hours. I settled for an old stand-by for lunch, and learned that two slices of pizza cannot be judged their appearance, and can be much more delicious their rubbery-appearing cheese would suggest. 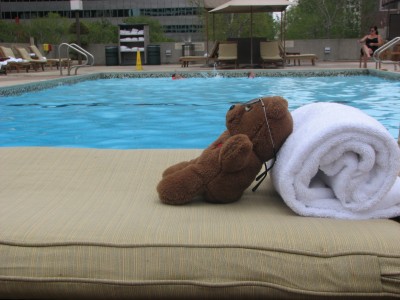 Not pictured: fat kid with inner-tube

With more food five hours away, I explored the 4th-floor terrace, discovering the pool and the wonderful LA skyline of smogged-

covered, but still very shiny, corporate offices. Amused for a while by a corpulent child crying when his belly folds flopped over his floaty water inner-tube (eventually causing it to burst in a even more hilariously pitiful moment), I snapped a couple dozen photos around the more interesting locations I saw and returned to the room to shower and try to bypass the block on the television’s pay-for-porn programming. Remembering I had the internet, I soon gave up. 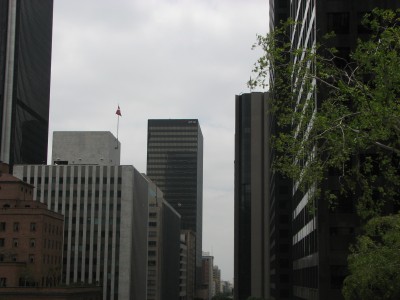 After meeting with a couple of my Aunt’s work friends and walking with them to their group dinner meet, I amused myself with the multiple bus-stop posters of Marvel vs. Capcom 3 that were littered around the city blocks before trying to deciding on going to the aforementioned brewery within the hotel for dinner. A delicious steak sandwich, 3-three Ciabatta bread, and a couple Golden Girls episodes later, I reunited with a couple of our E3 team over Skype and updated the schedule for the convention to accommodate some rather snide public relation directors. 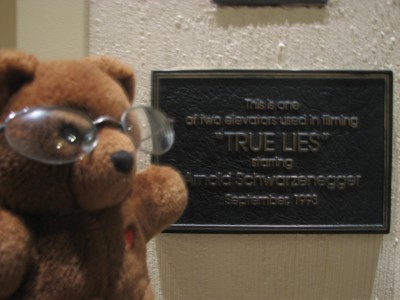 After a bit more exploring around the hotel, I began noticing handsome bronze plaques spaced randomly about the premises. The

Westin Bonaventure Hotel is one of the most filmed of its kind in the world, and these little notices were indications of what films were filmed where, and when, in the hotel. For instance, the elevator I used to reach my room was one of the two needed to film the famous Arnold-Swartzenegger-rides-a-horse-out-an-elevator sequence of True Lies. Having been inside the actual elevator, I found the space a bit too confining to believe the plaque, I have no idea how they could fit Arnold Swartzenegger and a hourse in there.. Bored again, I decided (quite out of the blue) to unwrap the Toblerone I had bought before arriving the city and eat it quite sexily, as is required of such candy.

As I round out my first evening in LA, E3 ever present on the horizon, I can’t help feeling like I ate too much today. I’m saddened by the fact that I will be unable to stay in this hotel during the actual convention, given that it was easier to book two separate hotels for the extremely busy booking period, but happy at the prospect of not having to tackle the world’s biggest gaming convention by myself again. But the pulsing beats of the lobby’s nightclub is an intoxicating blend of Black Eyed Peas and Darude, and I think I have room for at least a couple more drinks before I’m declared legally dead…or legally awesome, personal opinion depending. 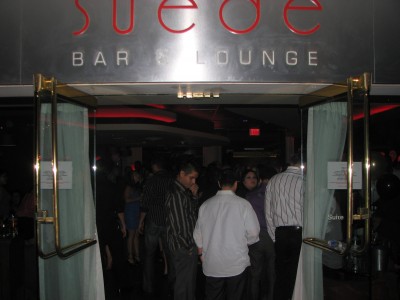