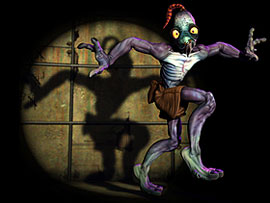 After a five-year hiatus felt over-long by its stalwart fanbase, the Oddworld franchise is set to return. Last seen in 2005’s Stranger’s Wrath, Lorne Lanning’s unique looking series has long kept a comfortable place in many a gamer’s heart. Developer Just Add Water recently announced that new games under the license have been in production for the past year, with more concrete details soon to be released.

As part of an official statement released on the company’s blog, Just Add Water has said of its work on the IP, “To work with the team at Oddworld has been amazing; being able to tap the minds of Lorne Lanning, Sherry McKenna and others has been fantastic,” said Just Add Water’s Managing Director Stewart Gilray. “It’s almost symbiotic in that when something moves forward on any of the projects we just start chatting about new items, or what if we do this. We’re all extremely excited to breathe life into the Oddworld universe and indeed to let it breathe life into us.”