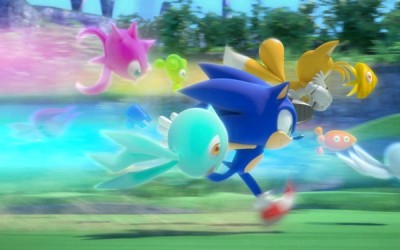 With Sonic the Hedgehog 4: Episode 1 getting the long-time fans of the franchise in a tizzy, a lot of attention have may been lost to Sonic Colors. The continuation of the 3D leg of the long-time franchise noted especially for its unpopularity with critics, Colors had to fight against a heavy anchor to overcome the immediate implications of its pedigree. For what seems like the twentieth time in our history with Sonic, the demo we were given had promises. This time around, however, Team Sonic was open about its mistakes in previous titles and seemingly keen to give its mascot the edge he had back on the Genesis.

For starters, the game is based on a recent development in the hedgehog’s lifespan that avoided a lot of the usual fan frigidity, the daylight segments of 2008’s Sonic Unleashed, as well as the homing attack and other combat additions made in recent titles. Sonic races across themed stages, shifting from 2D and 3D perspectives based on the level’s architecture, and maintaining a sense of frantic speed throughout. Dr. Eggman (or as we prefer to know him, Robotink) has built a massive amusement park in the greater atmosphere above the planet from stray asteroids, capturing a color alien species known as Wisps along the way. As Sonic races across the park, he will occasionally stumble across said Wisps, whose differing hues give him different abilities to interact with the level and enemies around him (think, Super Princess Peach on the DS). 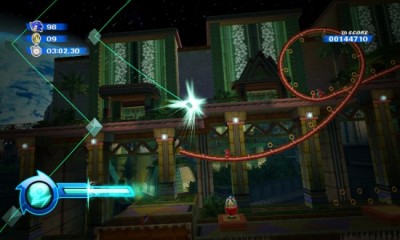 Our demonstration consisted of two different levels, Tropical Resort and Sweet Mountain. Both fit their theme as you would imagine, the former boasting a bright and blue Island aesthetic with the latter glowing with giant luminescent candies. As Sonic ran along both stages, we encountered both a cyan and yellow wisp at different intervals. Breaking the cage of the cyan one gave us a temporary laser dash offensive ability, with a limited target to target Sonic’s flight path before launching him TRON-style through the guts of the five or so robotic baddies down the way. The yellow alien turned Sonic into a hyperactive Dig-Dug, his spin dash transforming into a drill power that sent us through the crust of the level and into a sealed off underground passage loaded with gold coins. The producer’s informed us that we were only seeing a fraction of the powers that would be available in the final game, with presumably every color included in the basic rainbow getting its own wisp. Powers will also have multiple uses, they tell us, but our demo limited us to one per each alien. Bonus stages and chaos emeralds were also teased, but not shown.

All this attention on secondary abilities may seem like Sega is again loosing track of what makes Sonic “Sonic,” but its worth noting that all the powers are optional and only unlocked after a level has been raced through once. The producers took multiple chances to let us know just how important speed was to the design of the game, and just how deeply the focus was on making Sonic as fast as possible. To their credit they seem to have succeeded, both stages played out in the linear, loopy fashion we’d expect of the hedgehog, and the clip we sped along at felt suitably speedy.

While the game was demonstrated mainly on Nintendo’s Wii platform, Sonic Colors will also receive a DS version near the same time. The portable iteration will take after the under-appreciated Sonic Rush series, utilizing the touch screen as mainly a secondary (yet unexplained) function. Our time with the time was long enough to determine that the dual-screen mechanic is used much more intuitively than Rush (and features a much brighter, and user-friendly, color palette). Colors will not be a game taking advantage of Nintendo’s upcoming 3DS technology, and thus will keep to 2D throughout. Both the DS and Wii versions will feature exclusive levels and wisp-based powers, although nothing has been announced for either platform as of yet.

While story has never been a central focus of the franchise, Colors is looking to bring it back to basics with a team of American

Caution: levels are not edible.

writers this time around to better focus on Western sensibilities and humor. More importantly to any long-term Sonic follower, perhaps, is the Sega’s adamant point of including the blue hedgehog as the game’s sole playable character, with Tails and Eggman only making non-playable appearances throughout the game. No other characters from the franchise’s pantheon will be featured. The DS version will feature a similar story to its console big brother, but will also have Knuckles and Amy make additional NPC appearances at some point, with Sonic still retaining the sole playable role.

Sonic Colors seems to finally be bringing back Sonic in the right direction: across the screen as fast as possible. Taking advantage of one of the few positives the company has received in recent Sonic titles and adding flashy supplemental powers to it seems like a solid concept, happily devoid of werehogs and swords. Both the DS and Wii burst with colorful and multi-tiered levels that are long enough to satisfy but short enough to encourage multiple playthroughs. Story is calorie-loaded fluff, but hopefully now at least Western audiences will be in on the jokes. Best of all, it’ll be just us and Sonic again. 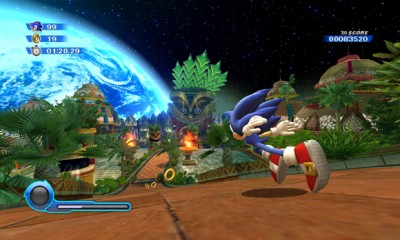 Keep in tuned to Elder-Geek for all Sonic Colors news as its September (tentative) release date approaches!