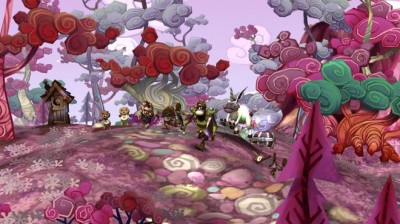 With the original Deathspank still cooling down after its Xbox Live/Playstation Network release early last month, Hothead is wasting no time in announcing the follow-up to the “Monkey Island meets Diablo” original. Deathspank: Thongs of Virtue, is a stand-alone sequel action-RPG still focused on the trademark humor of creator Ron Gilbert. The story takes the intrepid Deathspank across a war-torn world, the North Pole, and the oceans to find and destroy six mystical thongs that will bring peace into his world. Deathspank: Thongs of Virtue will release on Playstation Network on September 21st, and Xbox Live Arcade on September 22nd, both for $15 (12 Microsoft Points).

“Bigger, longer, harder–these were the words that drove us while we created the follow up to our introduction to the DeathSpank universe,” said Vlad Ceraldi, Director of Game Development for Hothead Games. “In T.O.V., we’re taking action RPG fundamentals and adding loads of new creatures, environments, weapons and characters, while continuing to push the envelope with our signature humor.”