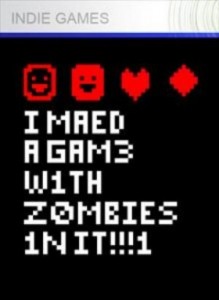 The highest selling title on Xbox Live’s Indie label (just surpassing 300,000 downloads), John Silva’s I MAED A GAM3 W1TH ZOMB1ES 1N IT!!!1, is branching out its brand to several high-end companies. First, Silva’s Ska Studios has announced a partnership with clothing retailer Hot Topic to produce a fan-designed t-shirt scheduled for release this September. The shirt will only be available through Hot Topic’s online store.

In addition, the game’s famous theme is seeing  a release for the Rock Band Network. Playable on the Xbox 360 versions of Harmonix’s Rock Band games, the song will retail for the same cost as the game itself: $1. Players eager to demonstrate their skill at the song can upload performances to Youtube (under the tag “RBN-ZOMB1ES”) for the chance to be awarded prizes.