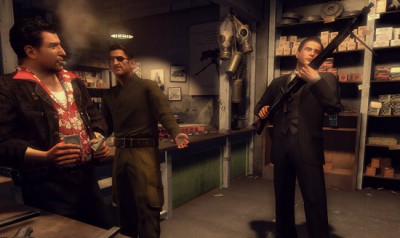 Seems like a developer can’t make a game with any ethnicity (aside from stubbly generic Causcasians) without upsetting someone. Like Rockstar earlier this year, Take-Two’s Mafia II has drawn the ire of a representative group that shares of some of their character’s heritage. UNICO, an Italian advocacy group, is none too happy with the way Italians are represented in the game, which they have called “insulting”, and demanded the immediate halting of its release.

The group expressed their concerns in a letter to Take-Two chairman Strauss Zelnick faulting the publishing company with making a game they find “inappropriate and insulting perpetuation of the pervasive and denigrating stereotype of organized crime being the exclusive domain of Italians and Italian Americans.”

“Why would [Take-Two] foist a game on their target audience of young people wherein they will indoctrinate a new generation into directly associating Italians and Italian Americans with violent, murderous, organized crime, to the exclusion of all the other ‘mafias’ run by other ethnic and racial groups,” said Andre DiMino, UNICO president, in an interview with MTV’s Multiplayer blog. “We are demanding they halt the release of the game and cleanse it if all references to Italians and Italian Americans...I don’t like to see any group denigrated whatsoever…This company has done things against the Haitians and the Cubans and now their target is Italian Americans. It shouldn’t be done to any group.”

Zelnick has released an official response stating, “Mafia II tells a compelling story about organized crime in America – a subject that for decades has been featured in movies, television shows and novels. Neither UNICO nor any other organization purporting to represent Italian-Americans has seen or played Mafia II. [Take-Two balances its] right to free expression with what we believe is a thoughtful and responsible approach…[it’s] specifically not targeted toward young people.”

Zelnick continues, “We will only release a title that meets our standards: as art, as entertainment and as a socially responsible product. We aim to distinguish creative and compelling story telling that advances artistic expression from subject matter that gratuitously exploits or glorifies violence or stereotypes. I fully and completely stand behind our creative teams and products, including Mafia II.”