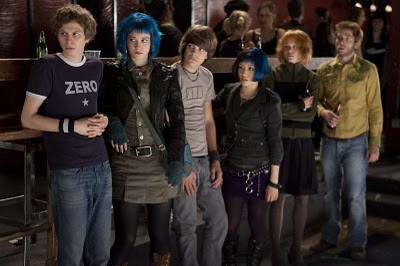 Scott Pilgrim has issues. His band, containing one ex-girlfriend and one groupie, has yet to hit it big even at local competitions. His apartment is a one-room, one-bed heap across from his parents house; shared by a gay guy with an active love life. To make matters worse, the girl of his dreams comes into his life with a league of evil exes he must defeat in all manners of kombat for her hand. All that, and he’s Canadian. Scott Pilgrim vs. the World is an explosion of eye-candy and semi-automatic joke-fire that will make geeks moist with inside jokes and the rest of the world stunned.

The titular Canuck lives in an intimate world rife with gaming references, the camera frame used as a graphical interface of comic book effects and 8-bit widgets almost as much as it is a device for filming things. Even references to other films don’t escape inclusion: Scott’s being apartment laid out in Fight Club fashion, among several dozen smaller hints. The near schizophrenic visual pace is set against an out-of-nowhere level of slick action and gangster cinematography, another level up for director of photography Bill Pope – and this the guy that did the Spider-Man and The Matrix flicks. Its a rare moment when the screen is exploding with Fantasia-levels of color excess and Silver Age lettering, and the transfers back to the real world (dead evil exes explode in CG and drop real-life Canadian currency) make its style and humor that more tangible. 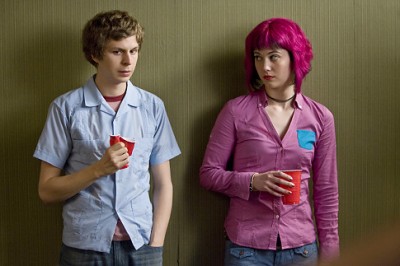 briefly. Cera-haters (and there are many of them) need not worry, in a film in constant temporal and audio-visual flux such as Pilgrim, the “Arrested Development” star’s trademark one-note awkwardness actually serves as a legitimately tether back to sanity, however much you will not want to use it. Sure, when it comes to the rare times when actual acting is required, Cera drops the ball as predictably as Charlie Brown not kicking one. But, through constant direction no doubt, Cera successfully adds a film-thin layer of ambition and wit that makes just enough impact to sell the part.

The rest of the cast fares infinitely better, with many performers making what should lead to BFCs (big fu*king careers) in the future (pay the most attention to Allison Pill’s drummer Kim Pine and Ellen Wong’s Knives Chau). The future Captain America and the current Superman also make great extended cameos as some of the evil exes pit against Pilgrim, and Wright is the rare director to make Jason Schwartzman a legitimate final boss. But the wicked soul of the film comes from its three leading ladies: Anna Kendrick as Scott’s younger sister Stacey, Aubrey Plaza as the ball-busting Julie Powers, and – most importantly – Mary Elizabeth Winstead as Pilgrim’s chiptune flame Ramona Flowers, who effortless whips out the kind of girl too cool for the world, but slumming in it anyway. 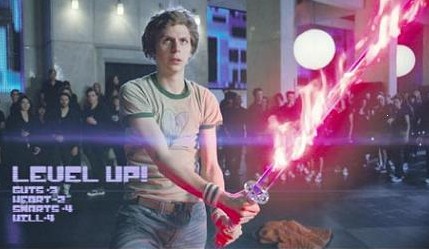 But for all its 8-bit graphics and (near) pitch-perfect casting, the life bar of Scott Pilgrim vs. The World is director Edgar Wright, who once again proves that by paying tribute to his favorite genres, he’s actually better than most under his punchlines. Having co-written and produced the film, the jokes are expectedly everywhere and pretty much in every fashion. Puns, sardonic comebacks, midi file sound cues and visual gags come quick and non-stop. They fly at you about 0.7x as fast as Hot Fuzz, but a second viewing’s mandatory for 100% completion. Continuity and expectation become Wright’s bitch as he uses every possibility to the fullest to pump in the sub-genre charm. The only film to more successfully dip in and out of a sequential art presentation was American Splendor.

Scott Pilgrim vs. The World won’t make you feel 14 again, it’ll make you want to BE 14 again. Its sub-culture know-how, breathless joke-telling and sexy presentation add up to a paradise for geek’s of all shades. It’s like getting a blow-job from an old friend, slick and familiar. This is what the summer season is meant for, and it embodies all we geek out over with the dead-pan intensity of Bea Arthur on fire. Insert your coins at the box office and do not miss this one.

Are you sure you want to quit this review?

2 thoughts on “Scott Pilgrim vs. The World (The Movie) Review”