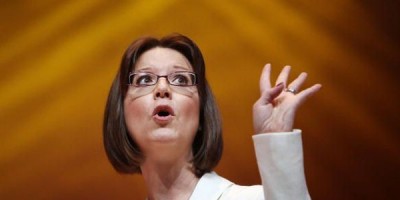 Known just as much for her press conference appearances as her work in the industry proper, Nintendo’s Executive Vice President of Sales and Marketing, Camme Dunaway, has reported left the company and the video game industry as a whole. Effective October 1st, the resignation of the former Yahoo! executive (who started work with the company in 2007)  is just the latest shift in Nintendo of America’s executive branch since its move from Redmond to California’s Bay Area.

“We appreciate Cammie’s contributions to Nintendo and the role she played in bringing the Wii and Nintendo DS experiences to millions of people,” said Fils-Aime. “Her team and the rest of Nintendo of America remain focused on our goal of maintaining the incredible momentum Nintendo enjoys heading into the busy holiday season.”

“I’m thankful for my time with Nintendo and proud of our team’s accomplishments in growing the Nintendo audience,” Dunaway said. “I look forward to watching the continued growth of the Nintendo brand in the years ahead.”