Dead Rising 2 takes place two years after Case Zero, and continues the story of Chuck Greene, former motocross champion and dutiful father. His daughter Katey, now 7, is still infected with the zombie virus and requires daily injections of Zombrex to stay human. The drug has been refined from the previous 12-hour window, giving the players a bit more breathing room in between injections. 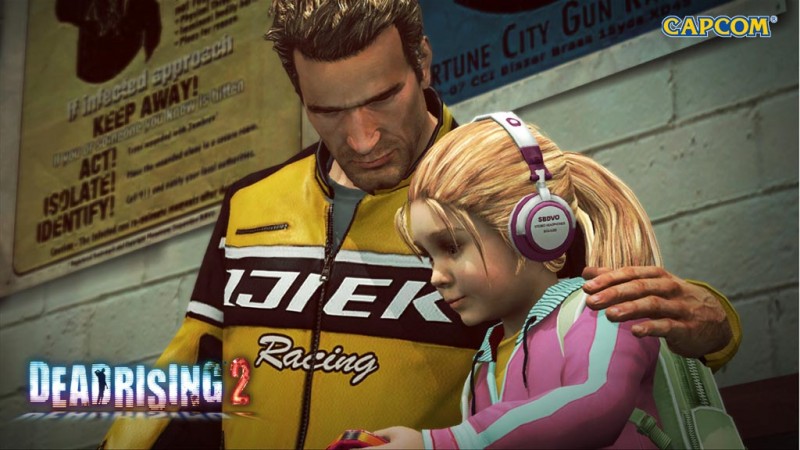 Because of the great expense of the drug, Chuck finds himself doing questionable things to maintain his Zombrex supply. At the start of the game, we find Chuck in Fortune City’s Arena competing in a reality game show called Terror is Reality (TIR) in which the goal is to kill the most zombies within the time limit against 3 other drivers. Before the competition, we hear of a protest group known as CURE staging a demonstration against this mistreatment of zombies. They believe that as long as Zombrex exists, a cure can’t be too far away, so it is morally wrong to use zombies for entertainment. The show’s producer and host, Tyrone King, is hearing nothing of it.

Shortly thereafter, an explosion rocks the Arena, breaking the cages and letting the zombies free. Sure enough, Chuck is caught in the middle and must now work to escape the city before the military quarantine moves in, all the while trying to help survivors and remaining ever vigilant of Katey’s infection.

The graphics are very similar to the first Dead Rising, except with more of a gambling theme than a mall theme, though we do have many locations like that as well. The frame rate is mostly consistent and handles well with the increased number of zombies onscreen. It’s hard to tell, but there are definitely more due to the greater number of open areas and continuous one-screen areas (no loading in between sections of a room). 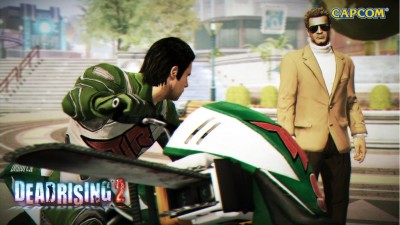 Chuck and the many survivors you will meet have a polished sheen to them, looking very realistic and well rendered. A reporter named Rebecca Chang is well rendered in other unique ways, making her the best looking female since Jessie in the first game. In addition, the variety of uninfected is greater with looters and other humans being added. The zombies themselves look great with several female and male types, complete with scars and decaying flesh. They may be little more than obstacles in your path, but they are well detailed. Details enter in a different form late in the game, making sure you won’t forget them, especially their new attacks.

The colorful menagerie of psychopaths returns with many melodramatic and over-the-top villains, such as a Siegfried and Roy like duo, a maniacal chef with interesting recipes, and a CURE protester who is a little too dedicated to the cause. As a nod to George A. Romero’s zombie films and their take on American society, these demented individuals provide some memorable encounters. The highlight of the game was anticipating running into encounters, especially if I was leading a group of survivors, knowing they would be able to help me take down the psychos.

The weapon combo system definitely produces some visual fireworks through its ability to combine different tools and weapons into new devices of destruction. The unlikely nature of some of these implements along with their over-the-top attack animations give the player a real motivation to find and construct new ones. The fact that they help you level up quicker is a nice touch as well.

When it comes to music, the game is mostly ambient with occasionally mall muzak to add to the atmosphere of consumerism. Given that this noise is meant to be annoying, it does its job to a tee. The psycho battles once again feature a variety of vocal and rock tracks that fit very well. While there isn’t anything as memorable as Gone Guru from Dead Rising, I was glad for the variety.

Making up for the somewhat sparse music are the sound effects. The zombie groans and moans are as present as ever. Survivors’ speech tracks have been drastically improved, with some being quite amusing. I found myself keeping the British rock band around both to help me and to hear their funny comments. Fully voiced cutscenes are well acted and keep the plot moving along, the best of which are the psychopath introductions. It is quite easy to see the flaws in these people as they try to justify their misguided ways, but it won’t stop you from vigilante justice either way. Then you have the case of the redneck hunters, which no one can justify. 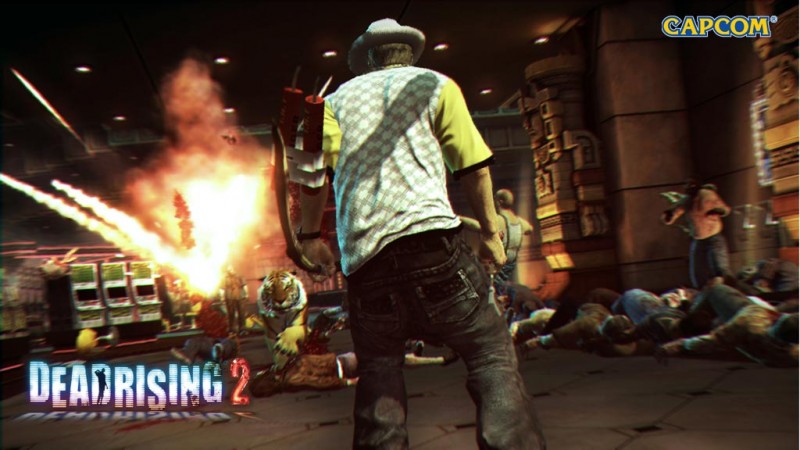 Best of all are the weapon sound effects. The sledgehammer has a sickeningly delightful sound of flesh being pounded, the chainsaw’s grinding of zombie flesh is always satisfying, and the drill bucket’s finishing sound is a hilarious pop/splat as the victim’s head flies off. Great stuff, and with dozens of combo weapons, players will find this just the tip of the iceberg.

Dead Rising 2 plays pretty much like the first game. You kill zombies, rescue survivors, complete missions, and try to escape Fortune City alive. New to the system is money, which can be used to purchase the Zombrex Katey needs as well as various other combo weapons and unlockable goodies. Money is pretty easy to find, be it by smashing ATM machines or gambling, so it’s good to use in a pinch if you are looking for more effective weapons. Having trouble against a particular psycho? Visit one of the pawnshops and even the odds!

The leveling system returns to give Dead Rising 2 the RPG vibe that I was happy to see again. Experience for leveling up is in the form of Prestige Points (PP) that you earn for everything from killing zombies to successfully escorting survivors to special circumstances throughout the game. This system ensures that DR 2 has a good learning curve. If you find yourself having difficulty, just level up a bit. If worse comes to worst, you can always play through the game not to uncover the storyline but to level up to ensure an easier time for the next playthrough.

I like this approachability for all skill levels. When combined with multiple save slots this time around, mistakes can be made without being fatal, lending the game to different playstyles for each gamer. All this serves to make a more approachable game.

In all, is Dead Rising 2 fun? Yes, but mostly for fans of the first game. I heard it said that the system hasn’t advanced far enough to make this a casual friendly game. While it is true that there is no quick saving or checkpoints, making the game more deliberately paced, I feel this adds to the atmosphere of the game. You survive because you are prudent in taking steps to address all the problems you are faced with. These include finding the truth, helping your daughter, and rescuing survivors. It is the kind of game that emphasizes multitasking, and it can be frustrating when things go wrong. When things go right, the fun is undeniable. Fans of the first game will find a lot to like about this game; everyone else will be satisfied with a rental.