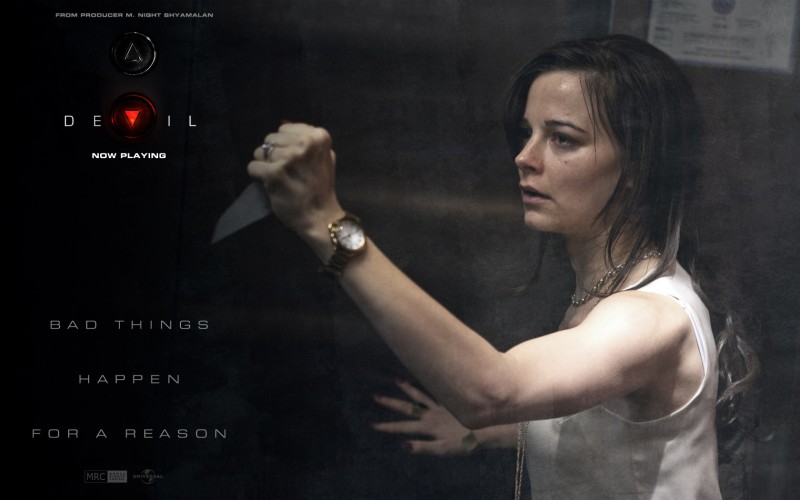 I think it’s probably hard being M. Night Shyamalan. After the critical and financial success of The Sixth Sense, everyone has been looking for M. Night lightning to strike again. We all jumped in our seats at the first sighting of the alien in Signs, but most people feel it wasn’t nearly as good of a film as The Sixth Sense. Most of us outright avoided Lady in the Water. And there are geeks on forum boards everywhere calling for his head on a platter for “what he did to The Last Airbender.”

Truthfully, when I think of M. Night Shyamalan, I think of J.D. Salinger, except that Salinger was a recluse. That being said, I think a lot of people will heretofore hold up anything that Shyamalan plays a role in and they’ll compare it with The Sixth Sense. Similarly, everythign Salinger ever wrote was always compared to The Catcher in the Rye. In a way, that’s unfair, but predictable.

Yesterday I had a large chunk of time to myself, and I had the pleasure of going to the movies. I was one of about five other people in the entire theatre. I strapped myself in, let the darkness sweep over the room and I was ready for some shittiness that Devil was no doubt going to bring me. After all, I can take it. I’m the guy who does our mockbuster reviews.

My initial thoughts about Devil? I loved it. It wasn’t the best film I’ve seen. It’s not the best film that Shyamalan has ever created. But as far as films go, I was entertained. Highly. After the film, I was bouncing from person to person in an attempt to find someone else who watched the film so I could talk about it with them. I haven’t found anyone yet. 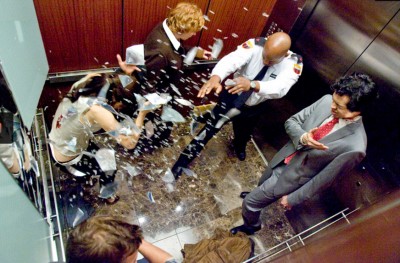 Devil not only plays with people's natural fear of the dark, but fears of heights and claustrophia all at the same time.

Devil plays out like a murder mystery more than a horror film. Five strangers are trapped in a suspended highrise elevator and as the outside world outside attempts to rescue them, coincidental and seemingly paranormal events prevent anyone’s access to the helpless victims inside. Someone inside the elevator is not who they claim to be, but is actually the Devil in disguise and kills off the passengers one by one as the lights go out. The gore factor is kept at a minimum in Devil as most of the killings are done in complete darkness, a technique that I particularly enjoy because what I imagine happening is probably far scarier than what can be put on film.

As it turns out, all the passengers in the elevator are horrible people. They’re con artists, scammers, thieves, brutes and more, and the Devil has arranged their meeting in this tiny elevator to reclaim them for his own.

One by one as the victims fell, my suspicions of who the Devil was shifted from person to person. And as my wife can often attest (because I can annoyingly point out the killer in the start of most most crime shows), I’m not one to be swayed very easily by cheap writing ploys. Thinking back over my experience, I can say that I’d like to watch Devil again, especially now that I know who the killer is.

John Erick Dowdle, the director of Devil, has a style that meshes very well with Shyamalan. Both should be proud of this film.

When sitting down to watch Devil, viewers shouldn’t immediately categorize this as a typical M. Night Shyamalan film, most notably because it was directed by John Erick Dowdle who also directed Quarantine–which I thought was a great horror film–and The Poughkeepsie Tapes. Together, Shyamalan and Dowdle create something that feels like the better parts of both of their work. Their styles mesh remarkably well and in the future, if they ever work together again, I’ll be sure to purchase a ticket. The story and execution of  Devil feels an awful lot like a good episode of The X-Files from Scully’s point of view as law enforcement authorities try to reach a rational conclusion to the murders without immediately resorting to the paranormal.

The acting in the film was actually well done. No one “pulled a Walberg.” And the Devil… was appropriately devilish. My only complaint with the entire film is with the very last scene. For spoiler’s sake, I can’t really say what happened. But I can say it felt out of character for the protagonist.

When this comes out on DVD and Blu-Ray, I can’t really recommend purchasing it outright, but I can definitely recommend this as a great rental. In the meantime,  Devil is a good horror movie to hit up in the theatres. Most will get some genuine thrills from it.

Now that I’ve got Devil behind me, I can look forward to Skyline.

One thought on “Devil Film Review”