The PlayStation Move has finally arrived, and it’s brought with it a decent collection of games both big and small. But what about the technology behind the Move itself? Earlier in the year we wrote a comprehensive feature detailing the promised functionality of the Move, so does the finished product live up to its promise?

First let’s get one thing out of the way, your experience with move will greatly vary depending on what game you’re playing. In the gladiator and table tennis games included in Sports Champions I had the most fun I’ve ever had with a motion gaming device, but the other Sports Champions mini-games, in addition to Kung-Fu Rider, were simply abysmal. The problem is that they either don’t match the movement made by the player with the action on-screen, or that significant bugs or input-lag is constantly present. So choose your game carefully, and keep in mind, that just because the game itself is bad, that doesn’t necessarily mean the technology is.

A big selling point for Sony was that the PlayStation Move would give you one-to-one precision motion control at no significant cost to performance. And they’ve delivered on that promise, the Move is truly precise, and at no noticeable cost to graphical fidelity or frame-rate. It might not be one-to-one, but it may as well be because you honestly won’t notice the difference. It can feel a bit odd at first, and you’ll have to adjust yourself to the idea that your full-body movements are miniaturized on the screen (depending on the size of your TV), but once you get past that it’ll feel smooth and natural. Though a big screen TV is certainly recommended, you should be able to make do with size 27″ and up. 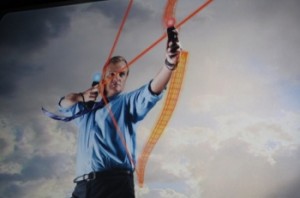 The great thing about the Move–compared to its current competitor the Nintendo Wii–is how it requires you to put your whole body into the game. If you want to punch someone really hard in the game, you’re going to have to really do it in real life. The Move almost perfectly measures the distance your hand travels in a swing, as well as it’s speed. Meaning that in the gladiator mini-game in Sports Champions, the harder you swing the more damage you do. To let you know you made a successful hit, the rumble feature in the Move controller kicks in just as your sword makes contact with your opponent, with the intensity of the rumble varying depending on the strength of your blow. In addition , not only does the Move detect the position of the controller and it’s speed, it also detects its angle. Meaning that in table tennis you can, with ease, hit swing balls, screws and high balls, simply by adjusting the angle of the controller to turn the paddle.

The final ace up the Move‘s sleeve is its ability to do augmented reality. With augmented reality you can make in-game items magically appear in your hand (Move controller) through the camera feed. It works by tracking the Move controller and simply overlaying a fitting object (baseball bat, sword, gun) onto the glowing orb. It effectively cuts away your fingers, as the handle of the object usually overlaps them, but you don’t really notice due to the huge cartoony nature of the objects. This feature means that your living room could be the game arena, where you can be tasked with hitting incoming baseballs in what appears to be your living room. It’s a highly immersive feature that works really well, but unfortunately it’s little more than trivial since as-of-yet there isn’t any good software to support it, with the exception the childish but decent EyePet.

Of course, the Move has its weak points. You’ll have to find a perfectly central and steady location for the PlayStation Eye for it to work ideally. I had some issues in this regard when trying to balance the camera on top of my rounding slope Samsung flat screen. It’s also crucial that the Move controller’s glowing orb is visible to the camera at most if not all times, the motion control still functions when it’s not, but at much lesser precision. And finally, though the realistic and complete movements required by the move are immersive and fun, they can get quite exhaustive to the average geek, which can be both a good and bad thing. 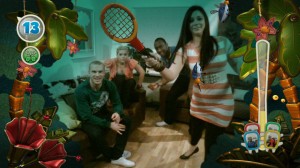 I can do nothing more than tip my hat to Sony for what they’ve done with the Move, they’ve managed to combine the PS2 era EyeToy with the competitor Nintendo’s Wii. And in doing so they’ve created something truly special. When writing this I almost felt like I had to nitpick to find something negative to say about the thing, as it all sounded a bit too good to be true. But it is a bit on the expensive side, coming in at 180$ for two Move controllers, one Navigation controller, the PlayStation Eye, and the game Sports Champions, which is really the combination you’ll want in order to experience all that Move has to offer. It also has a limited selection of games at the moment, let alone good ones.

As a technology Move is simply superb, and is something I would recommend every gamer try. If you’re not particularly interested in motion gaming however, you can probably wait a bit with picking this one up. New and better games are on the way, which will undoubtedly make it a sweeter deal, and while the price likely won’t go down anytime soon, random store-sales are allays a possibility. This one is worth buying, but not necessarily right now.

For more detailed information on the PlayStation Move go here.