I’ve received a few questions about my recent Final Fantasy VI Dream Oath Opera video, so I felt that it was appropriate to write up this little ‘making of’ piece.

I started work on the project shortly following a disappointing Distant Worlds concert in Washington, DC. As I pointed out in my review of the performance, the music was excellent, but the accompanying video was amateurish and poorly edited.

So I decided to put my money where my mouth was, as it were, and make something better. Final Fantasy VI has always been and will always be my favorite in the series, and I feel that it’s unjustly in the shadow of Final Fantasy VII, a game I consider to be inferior in almost every way.

But enough stoking of the fanboy flame—I was initially planning on hand-drawing and animating the opera scene, but the obstacle of my inability to draw was one too difficult to overcome. Then I considered gathering live action footage and other animated footage, piecing it together, and then rotoscoping the whole thing anew, but decided that would take far too much time and effort. 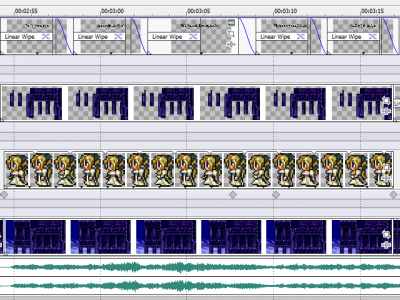 From top to bottom, the lyric text track, the foreground .png that allowed Maria to walk behind the columns on the balcony, the Maria sprite, the background, and the audio.

I finally decided to essentially ‘remake’ a video I had thrown together much earlier. Under the name GrandConjurer, I produced a video that had the gameplay from FFVI synced with a live performance of the opera. It was well received on Gametrailers, where it was posted, and it was ‘good enough’ for my standards at the time, but I knew that I’d have to do something better.

While my first attempt at this used a Japanese performance from Orchestral Game Concert 4, an album that was released in Japan in 1994, I felt that using the English version from the first Distant Worlds album would be best. I have since imported a copy of the More Friends concert, and, in retrospect, I’d have preferred to use that version of the opera.

But anyway, I happened to have the album, so I ripped it in FLAC and started gathering environments, object, and character sprites from fan sites. Once I had everything I needed, I started upscaling them to fit a 1920×1080 frame. Early on I tried redrawing them, but the number of pixels didn’t provide enough reference for me to create something decent with my limited drawing skills.

Individual sprite animation was handled with GIF files. Whenever you see a character walk in the video, that’s one GIF file with tweaked intervals to make them move faster or slower. Everything else was done using PNG files and the Track Motion feature in Sony Vegas Platinum 9.

This is about 14 seconds of footage in the duel between Draco & Ralse.

That’s right—I didn’t use Flash. What I did was use separate video tracks in Vegas as one would use layers in Photoshop. When characters were static, I’d merge them with the background. This was done partly to keep things a bit more organized, but mostly because the Platinum version of Vegas only allows 4 video tracks. Towards the end when the animation became more complex, I spent a lot of time juggling things around. The fact that the text takes up a video track was also a major factor to consider.

I originally removed the lyrics halfway through because I anticipated that keeping them in would pose a problem in light of the 4-track limit, but the frame seemed empty without them. After all, the game has the lyrics on screen. 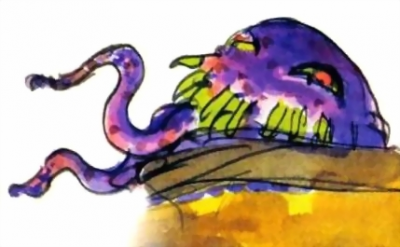 Those who have listened to the piece enough will notice that I cut out a piece in between Draco’s first verse and Maria’s scene on the balcony. In the game, that missing part plays while Locke is with Celes in her dressing room and when he makes his way up to the balcony to watch the performance.

I knew right from the beginning that I didn’t want this to be a simple syncing of music to the events from the game, which also explains why Ultros and party members never fight on stage and why Setzer never appears.

In the game, there is no finale. The opera is interrupted before Draco & Ralse duel. Live and recorded performances of the opera act as if this never happened, and the Distant Worlds recording is no exception. It’s the opera, ever so slightly abridged, running from start to finish as originally intended.

The video took about 4 days to complete. I tend to work for several hour long stretches and somewhat irregular intervals. As for the response, I couldn’t be happier and I’m glad that so many enjoyed it. For those who haven’t seen it, check it out below.