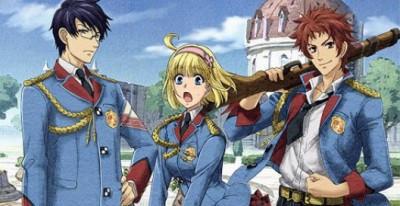 It’s time to reenlist in the Gallian war effort as Valkyria Chronicles II brings it unique look at sophisticated tactical RPG elements to Sony’s handheld trenches. With a brand new cast of characters and a multitude of new gameplay features, is this a tour of duty worthy of its franchise’s already stellar namesake?

The most notable and immediately apparent sacrifice to the handheld conversion is the shift in art style. Gone are the watercolor flourishes that gave the original Valkyria Chronicles its distinct visual appeal, and in its place is a much more generic anime art direction. Lines and borders are still exaggerated in that hand-drawn aesthetic, but character design (especially in cinematics) has taken a few too many cues from Shonen expressionism, with inhumanly big eyes and over-zealous emotional twitches. The audio is also disappointingly subdued, save for returning themes and cues, and quickly evaporates into the background long before leaving the slightest impression.

But more important things are afoot than art design, as the kingdom of Gallia can’t seem to stay stable for long. Only two short years after its victory against the Eastern Imperial Alliance during the Second Europan War, a civil war breaks out and threatens to tear apart the fabric of the nation. So great is the force from the citizen uprising that the Gallian army draws more and more of its front line forces directly from the cadets at Lanseal Military Academy. Such a prologue brings a collection of student personalities into the harsh realities of war, and the heavy themes of discrimination, death, and genocide.

The mix of sorcery and science that meshed so well on the PS3 remains largely intact in Valkyria Chronicles II. The veritable demigod Valkyries make their presence known alongside armies of rumbling tanks, and it all still feels as vibrant and meshed as before. What throws a wrench into the works is the new narrative setting. While Japanese schools have been the supplemental locations of many an excellent game in the past, having Lanseal Military Academy so central to the plot has dragged what was once a lofty plot into standard anime tropes. 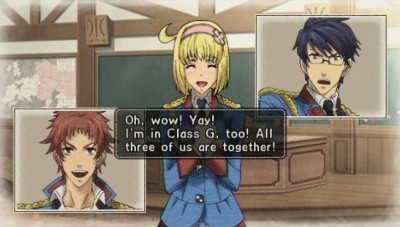 The mediocre hub tends to reinforce itself through the main characters and their interactions with each other. Military cadets that are fast becoming combat veterans are somehow still bound to restrictive school-kid stereotypes that will definitely feel asinine to those not inclined towards the specific slice-of-school-day style. Not helping matters is a script far devolved from the meandering philosophies of the original. Characters (over)react to everything on a much more histrionic manner than circumstances call for, and the storyline as a whole looses much of its former gravitas for it.

Thankfully though, the story is by far the most dramatic departure from the prequel’s roots. On the surface, much of the battle-by-battle combat remains intact. Players begin each turn overhead in a Command mode before selecting individual units to move around and act within the 3D environment, all of which is determined by Action Points. Each character has a limited movement gauge to work with and utilize their weaponry, class, and any available cover to advance on enemy forces. Opponents will attack all moving characters until the player enters an aiming mode to weigh hit probability and prospective damage. Once a player exhausts his turn the enemy will progress through a phrase before returning control the player, a pattern which repeats until victory or defeat conditions are met. 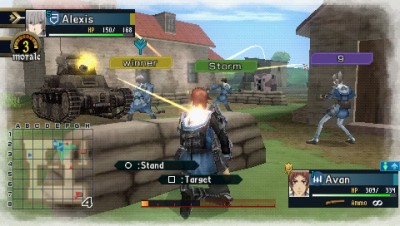 The open maps that stood for each battle have been broken down into multiple zones connected by enemy camps, the capture of which opens the next area. These bite-sized maps offer a much more forgiving progression, as those characters that fall to early bad decisions are easily re-spawned at the end of each partial map. It’s also far less easy than it sounds, each zone catering to the new cartography and presenting its own unique challenges. Weather also plays a much larger role this time around, with more dynamic patterns effect visibility and weapon effectiveness on a dynamic scale. Occasionally such meteorological influxes will frustrate rather than challenge, but overall they are placed and executed with expected fluidity.

The class structure has also been retooled and expanded upon. The original Valkyria Chronicles suffered from some serious class balance issues as the levels rose, but here character

evolution has been greatly advanced. Scout, Shocktrooper, Lancer and Engineer classes all return, but as base classes that can be modified and specialized through advancing across upgrade branches. The change almost feels like the reverse of what occurred between the first and second Mass Effect, for the better. Characters still level as a group but aren’t tied to any specific class, letting player preference completely dictate the outcome of battle. The player’s tank is also customizable, balanced by weight metrics rather than the original’s Diablo-esque slot system. Not all weaponry or tech advancements were created equal or comparable, but it’s a definite improvement nonetheless. It all feels much more intuitive and open-ended, and goes a long way towards a more personal experience.

A surprising inclusion for the PSP-bound sequel is some seriously polished multiplayer and supplemental mission structures. Ad-hoc multiplayer stretches between both competitive and co-operative modes, where thanks to the game’s more army-customizable approach, battles play out impressively balanced and rewarding. The entire single player campaign can be approached cooperatively, although against AI the difficult plummets off an extremely high parapet. The multiplayer was not an excuse to skimp on the single player campaign, however, the many story missions benefiting from dozens of optional battles, as well as the suite of cutscene playback and background history exposition carried over from the Playstation 3. The game is, oddly enough, over double the size of its predecessor despite its portable nature, and is excellently suited for the on-the-go play style.

Valkyria Chronicles II impresses by how much more content then were able to add while downsizing to the PSP. The multiplayer is almost tied with Monster Hunter Portable in its addictive smoothness, and the new tiered upgrade system is a welcome enhancement to an already solid campaign structure. The core gameplay is as unique and enjoyable as expected, and there’s much more of it to go around. The trite anime plot will keep most players too annoyed  to care why they are fighting, but when war is this much fun, little reason is necessary.