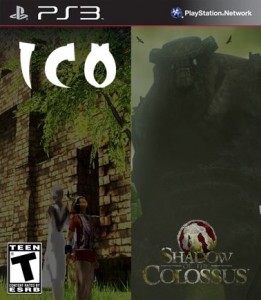 Image not representative of any actual product

One of the persistent rumors of the past few months has been a HD collection similar to one Sony released for God of War, this time with Team ICO’s back catalog. With The Last Guardian poised to make its Tokyo Game Show appearance later this month, Wal-Mart has apparently taken the rumors one step further. The world’s largest retailer has listed a “Team ICO Collection” of sorts for pre-order, including both Shadow of the Colossus and ICO remastered in HD, with a supposed release date of April 1, 2011. With initially appearing as an April Fool’s joke, the date is also the first day of the 2011 fiscal year. Either way, Sony has issued its traditional response of not commenting on rumors or speculation when contacted by Elder-Geek.