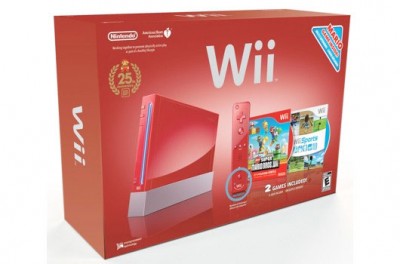 The 25th anniversary of Super Mario Brothers has been a big deal for Nintendo, with special edition games and swag lining many a Japanese store shelf. Now the best of it is heading across the seas, as the Big N has announced that a special anniversary bundle of the Wii console will come to stores this November 7th, the same day as the launch of the Wii Remote Plus (the standard wii-mote with built in Motion Plus).

The bundle includes a red colored Wii system and wii-mote, and a copy of both New Super Mario Brothers Wii and Wii Sports, all for $200. The DSi XL will also receive a bundle, this time with a copy of Mario Kart DS, Photo Clock, and a couple pre-loaded Brain Age games. Those looking for just the new Wii Remote Plus can pick it up as a stand-alone product for $40.