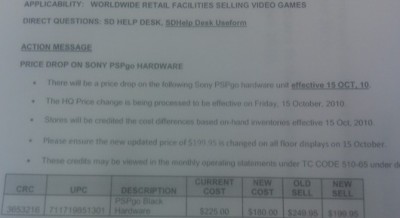 In a move lauded as common sense by as many analysts as the reasons they are giving for it, Sony has dropped the price of the Go! iteration of its Playstation Portable handheld line. Lowing the suggested retail price from $250 to a straight $200, reports are suggesting the drop could come into effect as early as October 15th. As expected, Sony’s official reply to our queries here at Elder-Geek have been the usual “we do not comment on rumors and speculation.” But given both the impending launch of the 3DS and the confirmed existence of a PSP2, there is motivation a plenty for the price cut.