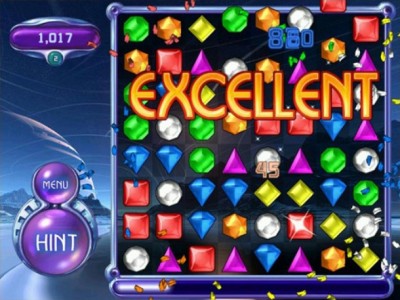 PopCap announced the impending release of Bejeweled 3, the first direct sequel in the franchise since Bejeweled 2 in 2004. The game will release December 7th on the PC for $20, and come equipped with HD graphics and new game modes effecting not only the challenge of the game, but the mood of the player, ranging from relaxing to intense. Brick-and-mortar outlets are also expected to receive copies of the game sometime after its launch on Popcap’s official site.

“Casual video games have been popular going back to the 1980s, but the introduction of Bejeweled 10 years ago launched an entire industry,” explained David Cole, founder of DFC Intelligence. “No other casual game comes close to the success of Bejeweled in terms of popularity and influence. PopCap has been able to keep the franchise strong for 10 years because they have focused on quality and innovation and have not flooded the market with dozens of sequels. I fully expect Bejeweled 3 to not only be a big success in its own right, but also ensure the Bejeweled brand continues to grow in popularity over its next decade on the market.”

“The challenge in creating a new version of Bejeweled is to innovate and keep it fresh and exciting without losing touch with the game-play that millions of people love. So we’re very careful when we make changes to the core game, which is why it can take so long!” said Jason Kapalka, chief creative officer at PopCap and co-creator of Bejeweled. “We’ve worked hard to make sure Bejeweled 3 retains the classic appeal of the earlier games while bringing a host of exciting new features to the table.”

One thought on “Bejeweled 3 Confirmed, Dated”