I walked into Donkey Kong Country Returns with the wariness of a child sitting on a whiskey-scented mall Santa’s lap. I mean, I have good reason right? Nintendo’s blitz of old-school games hasn’t exactly impressed me. Metriod: Other M was a little too melodramatic and Kirby’s Epic Yarn was more of a beautiful child’s plaything than a revitalization of a long untouched series. If you read my Donkey Kong Retrospective you know that I had some heavy doubts when it came to this final push. Could the Rare gem that was Donkey Kong Country be revitalized with a Retro touch? The answer is yes, yes and a thousand times yes.

Donkey Kong Country Returns is an expertly creative platformer that’s charm far out swings it’s boorish name. It all takes place on that same island we’ve visited so many times before. A volcano has erupted and unleashed a swarm of maleficent melodic masks that hypnotize all of the islands inhabitants with their catchy tunes and uses them to scoop up all of the bananas, including DK’s secret stash (which is still hidden under his hut for some reason). Now, Donkey Kong and Diddy Kong must roll into action to recover the stolen fruit and save their animal friends (or kill them all, it’s hard to tell).

The game is pure platforming bliss. The music is elegant, the scenery is gorgeous and the gameplay is tough as nails. Don’t worry though; most of the more difficult parts can be overcome at the expense of some cool thinking and a handful of lives. The difficulty is reminiscent of classic Mega Man games, you may die a few times but once you get the lay of the land down you can practically run through a level. DK should really invest in a better security system.

What really pushes DKCR in front of titles like New Super Mario Brother’s Wii is its attention to detail. Every level feels like an organic environment. When DK pounds, plants and trees shake on all plains. Pirate ships battle in the background and a small action can send ruins a-crumbling far in the distance. Even the camera work is engaging, it pans and zooms into some impressive vistas that put Castlevania: Lords of Shadow’s stagnant scenery to shame. As a subtle compliment, the music in these levels is a wonderful mix of classic tunes and new ambiance. Even the energetic boss battles are accentuated with minute notes that compliment the comical tone that the game possesses.

The levels are short, much like the original series, but the difficulty and variety keep them from getting old. You’ll find yourself dodging waves, riding mine carts and flying barrel rockets and I never felt any of these tasks aged as I went. The island map, a-la Yoshi’s Island, is a blast from the past and the clutter of bonus features in levels will keep you working for a long time. Every level has KONG letters, puzzle pieces and a time trial to beat. If you like doing everything than this is great, but the rewards for such sacrificed time are simply artwork, music and the mildly entertaining dioramas. Still, the game sports some surprises that will keep you hooked for quite some time as long as you can stomach the challenge and experimental surprise deaths. 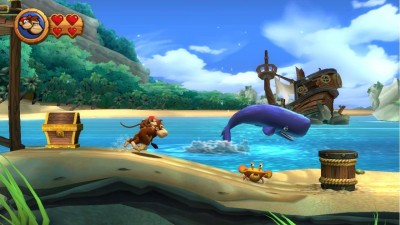 The dynamic backgrounds are an amazing touch and sometimes elude to future troubles.

Nothing is without faults though. While the platforming is solid, the DK and Diddy dynamic is lackluster at best. In single player, Diddy Kong is reduced to a double jump power-up and in multiplayer he is relegated to more of a tag-along partner than an asset. I was disappointed that I never got to take the younger Kong’s reins seeing as though I actually like the little guy. Similarly, the waggle, while not being any encumbrance, adds very little to the game. It does have its place, like in a frantic punch out at the end of a boss fight, but I mostly found that the awkward flailing disturbed the solid physics and controls the game touts so highly.

While the music is outstanding, the sound effects are awful. Many of the utterances out of the characters are cringe worthy and I found myself hurrying through Cranky Kong’s Cabin in an attempt to avoid his awkward grunting. Cranky’s presence brings me to one of the games few shortcomings. He is the only returning character from the classic franchise aside from our heroes. Yes, K. Rool and his Kremlings are gone. Maybe it’s just my nostalgia talking, but the myriad of angry animals in DKCR just never possess the  same charm or threat I felt from K. Rool and the gang. Sure they die in fun ways and some of the bosses are more than amusing, but the lack of a cohesive enemy front made me idle through the bad guys and focus solely on completing each level. 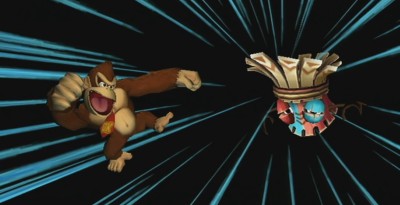 The new enemies just never live up to the originals.

Donkey Kong Country Returns does exactly what the title insinuates. It makes you want to return to your Wii, return to the classic difficulty of old-school platformers and return to Kong Island for another romp in the treetops. The game is the best thing we have gotten on your little white PS3 controller charger in quite some time. I strongly recommend that everyone who has become jaded by third person shooters and open world action titles to hunker down with this little piece of history and see why us Elder Geeks got into the medium in the first place.