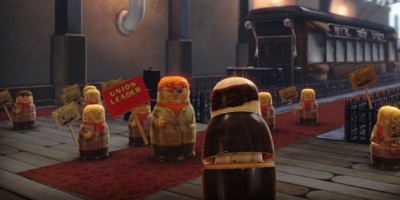 With Costume Quest making headlines as a value-packed holiday season download, it appears that Double Fine’s recent restructuring has started out successfully. Continuing the trend, the Tim Schafer-lead company has announced its next download-sized title, Stacking. Playing as the famously collapsible matryoshka dolls from Russia, gamers will play as the world’s smallest doll – Charlie Blackmore – and combat a 1930s-styled world using the unique power each doll he encounters has. The catch is that only the power of the outermost doll layer is active. The game is set for a Spring 2011 release on both the Playstation Network and Xbox Live.