Ever since the abominable day of Tony Hawk: Ride that I subjected myself to last year, I’ve been hoping that an arcade style skateboarding series would sprout up to fill the void. Sure, Skate 3 continued to play the role of the ‘skating sim,’ but as one who grew up playing classic Tony Hawk titles, it’s not quite the same.

It was during E3 that I caught a glimmer of hope. A new skateboarding game featuring Shaun White, developed by Ubisoft Montreal. “Could this be it?” I thought as I covertly streamed the Ubisoft conference at work. Well…months later, the harsh reality hit me in the face like the asphalt my in-game avatar became so well acquainted with.

On the surface, you expect Shaun White Skateboarding to be about as arcade-y as they get. Using the power of your skateboard, you morph the landscape and free the minds of the brainwashed masses that populate a massive and soulless metropolis. The ludicrous plot revolves around a looming gubernatorial entity known as ‘The Ministry,’ committed to sucking the life and color out of the world around them. Apparently, the greatest threat to their diabolical plot is Shaun White and your created character. 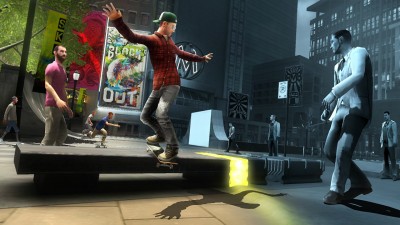 Behold the transformative power of skating.

Normally, I wouldn’t go out of my way to criticize dialogue in a skating game. But every word, written or spoken, is so overdone that it must be addressed. In the game, your skater is portrayed like the Messiah, riding a deck fashioned from the true cross in a never ending battle against the status quo. Other skaters speak, move, and act like the worst kind of hippies, and the entire game glorifies skating as this liberating movement capable of changing the world. Frankly, I think it does the sport a great disservice.

But anyway–cutscenes are easily skipped, and there aren’t many. However, when you’re still left fighting the unyielding controls after an hour of play, chances are good you’ll just turn it off. And you’d be wise to do so. Ubisoft Montreal has done the impossible–they’ve made a skateboarding game with a broken control scheme. In the infancy of the subgenre, this would have been understandable. But there were 9 sensibly controlled Tony Hawk games before it that essentially perfected the arcade style controls, and 3 Skate games that successfully created sim style controls.

Shaun White Skateboarding, in an attempt to be ‘different,’ decided to create a new control scheme that’s best described as the mutated offspring of the other two series. If you’ve played any skateboarding game before, Shaun White will feel uncomfortable and stiff beyond belief. Just as other console FPSes mimic the perfected gameplay mechanics of trailblazing franchises like Halo and Call of Duty, so must the skateboarding developers recognize that they can’t do any better and shouldn’t try. 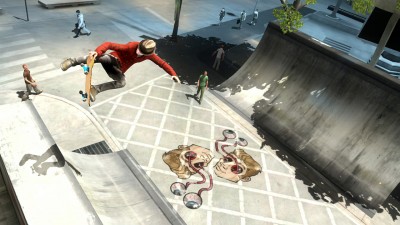 The vert controls are even more infuriating than the street ones.

I can appreciate innovation, and indeed it is something that should be prized in this industry, but innovation is the creation of new gameplay mechanics–not the butchering of something already established as functional. For instance–the world shaping mechanic is quite interesting. Of course, you can’t actually choose how to shape the world–just when. It’s one of the few redeeming factors of the game, but hardly enough to justify the fact that it’s not fun to play.

The graphics, music, and everything else is a moot point seeing as not even the most committed masochist will spend more than an hour playing this game if he doesn’t have to. I recommend a rental to Ubisoft Montreal developers, so they can see what they’ve done. To everyone else…break out the PS1 or PS2 and enjoy some classic THPS if your arcade skating itch needs scratching.