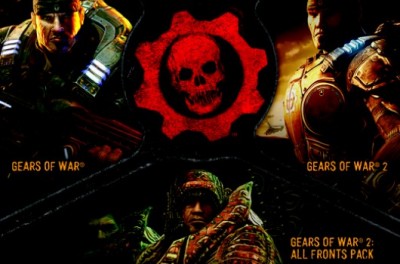 A Valentine’s Day present for the rest of us, the Gears of War Triple Pack bunches together the first two entries in the shooter franchise with the All Fronts Collection expansion to Gears of War 2. Retailing for $30, the compilation will launch in the United States on February 15th exclusively for the Xbox 360.

Experience Gaming’s Biggest Saga from the Beginning with the “Gears of War Triple Pack” on February 15th!

New compilation offers unprecedented value with both award-winning “Gears of War” titles and the complete “Gears of War 2: All Fronts Collection” Game Add-on

Cary, NC, January 18, 2011 — For gamers who haven’t yet experienced the first two installments of one of the most celebrated video game franchises in history, Microsoft is making it easier than ever to jump into the action with the launch of the “Gears of War Triple Pack” on Feb. 15 in the United States.

For half the price of a standard retail game, this compilation includes the award-winning “Gears of War” and “Gears of War 2” along with the “Gears of War 2: All Fronts Collection,” which features the sequel’s bonus “Road to Ruin” campaign chapter and 19 additional multiplayer maps. This compelling collection offers new players a chance to experience the first two installments of the award-winning franchise before the launch of this year’s most anticipated blockbuster, “Gears of War 3.” Available for a suggested retail price of $29.99, the “Gears of War Triple Pack” includes a total of 38 explosive maps* and 61 campaign chapters, and every Achievement to date worth a total of 3,000 Gamerscore.

Published by Microsoft Game Studios, the “Gears of War” franchise has won over 50 “Game of the Year” awards, sold more than 12 million copies worldwide and redefined the third-person shooter genre this generation. One of the bestselling Xbox game series of all time, “Gears of War” is exclusive to the Xbox 360 and its riveting multiplayer action makes it one of the most popular titles on Xbox LIVE.

*Five multiplayer maps from the original “Gears of War’s” Multiplayer Map Pack 1 and “Hidden Fronts” Map Pack are not included on disc, but are available for download on Xbox LIVE at no additional charge.

3 thoughts on “Gears of War Compilation Pack Coming in February”