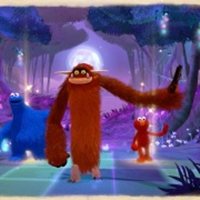 Sounding more like an industry mad-lab than an actual project, the folks at Double Fine are hard at working making a Kinect-exclusive title with the “Sesame Street” license. Sesame Street: Once Upon a Monster is the studio’s first licensed venture, and puts players in a “storybook” world with the likes of classic characters like Elmo and Cookie Monster. The game, published by Warner Brothers Interactive Entertainment, will teach children “life skills” while they solve puzzles and interact with a myriad cast. No release date has been announced.

“Sesame Street had a profound effect on me, and many members of the Double Fine team, when we were children. So did video games.” Double Fine founder Tim Schafer mused, “Now many of us are parents and we want to share with our kids the great experiences we had, but also the completely new ones made possible by cutting-edge technology like Kinect for Xbox 360. So it’s a labor of love on many levels.”