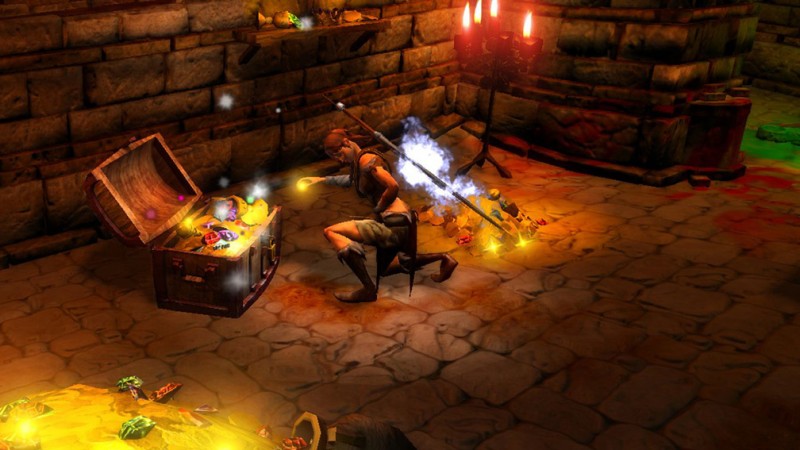 Oh humans. How you love your silly gold.

Dungeons is the latest strategy / sim / rpg hybrid from Realmforge Studios and published by Kalypso Media (the same publishers who bring you the Tropico series and Sins of a Solar Empire.)

In Dungeons, you play the role of an evil Dungeon Master who lures unsuspecting heroes into his lair with temptations of new weapons, gold to find, monsters to slay and traps to disarm. Once you lure heroes into your lair, you disable them, and steal their souls in your prisons and torture chambers in order to improve your own powers and upgrade your dungeon. 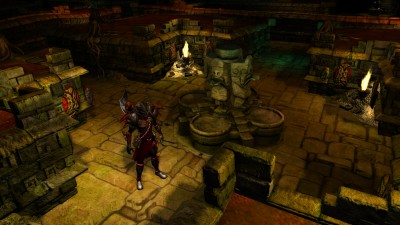 At its core, Dungeons is reverse Diablo, but played in a strategy sim game format. In the lair beneath you, lies YOUR boss and as you progress through the game’s scenarios, you climb your way down the totem pole to usurp their position and eventually become the new Lord of Darkness. It’s a clever format and fans of the Diablo series may find something here to love.

In fact, the entire Dungeons experience is a very tongue-in-cheek parody of the Diablo series, but it also tosses in plenty of references to Dungeons and Dragons and the RPG genre at large, Star Wars, the James Bond series, and it even takes a few moments to poke fun of Kalypso themselves.

The gameplay, delivers a very solid experience for strategy sim fans, but it is presented through a slightly lackluster tutorial system. But in essence, the game runs on three elements: Prestige, Gold, and Souls.

Prestige is gained by filling your dungeons with artifacts and objects like skulls, burning campfires, sarcophagi, or any other stereotypical “scary dungeon” decoration that will arouse the interest of wandering heroes. If a hallway isn’t adorned with prestige, a hero most likely won’t venture down it. It’s too boring. The higher level of prestige you have, you can then build higher quality traps, and summon more powerful monsters. To build prestige, you need to spend SOULS. 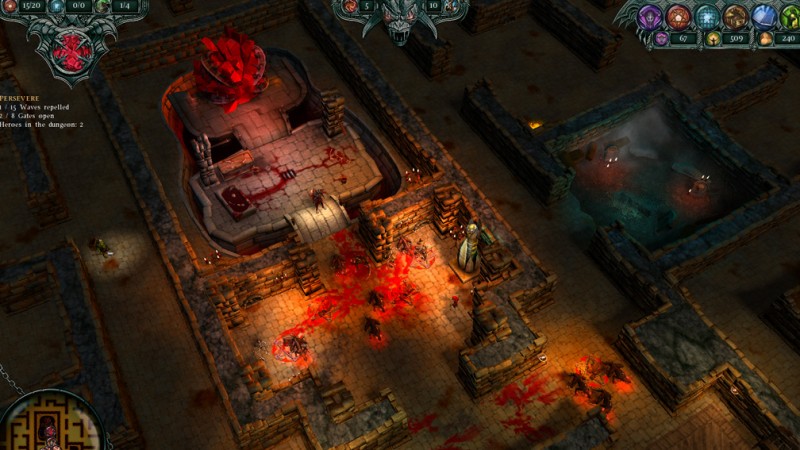 Souls are collected from happy heroes! Heroes are entertained by collecting loot, disarming traps and fighting monsters. Once their happiness meter fills, you can dispatch them (or have your minions automatically do it) and steal their souls while they’re imprisoned. Heroes also drop gold when they’re killed but gold can also be found while your minions mine out the walls for your dungeon expansions.

By juggling these three elements, you can build your ultimate dungeon to entertain and then… destroy all of your carefree do-good-er guests.

While most strategy sim games are very laissez-faire, you can directly intervene in most of the games’ progress through your avatar, the Dungeon Master. While directly controlling your dungeon master, you can kill heroes, send them directly to prison, oversee building operations and destroy opposing dungeon masters and their lairs. And when you’ve finished certain tasks or completed scenarios, you can even level up and gain new skills. 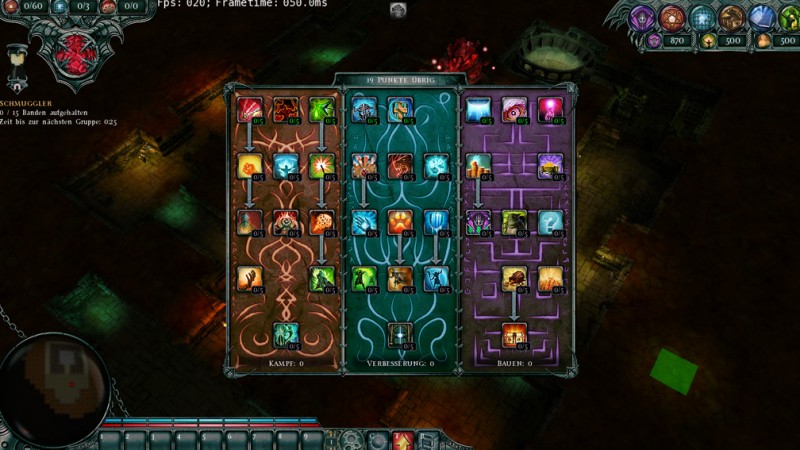 Leveling your avatar is a nice RPG touch.

Aside from the slightly convoluted tutorial, the game also sports some graphics that are a little below par, but they’re more than functional. The game can be cripplingly hard to more casual strategy sim players. Normal may feel too hard, and easy may feel TOO easy for a lot of gamers. The voice work of your sidekick assistant feels ok at first, but after a few levels of hearing him constantly say “master master” over and over again, you begin to realize he sounds like a bad Grover and Gollum impersonator.

In the end though, we had a lot of fun spending time with Dungeons. It’s funny. Some of the lines that heroes deliver while fighting and exploring will make you giggle in a slightly embarrassed fashion. It provides a good challenge. The tutorial needs some work, but once you understand the basics of the game, it picks up very quickly. Designing your own dungeons is always a blast and the main campaign will keep most players occupied, but the real love for the game can be found in the custom scenarios where you have complete control over your own underworld.

It’s far from perfect, but those who like it, will love it. And for some of us, it will help us fight denial that Evil Genius 2 will never see the light of day. At $40 it feels a little pricey but happily there is a demo available for you to try. And that’s what we’re rating it. “Worth trying.”