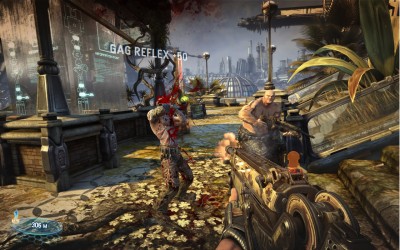 Ever the bastions of “fair and balanced” news, the staff at Fox News have set their sights on the video game industry once again. A new editorial written by John Brandon has asked the simple question: “Is Bulletstorm the Worst Game in the World?“. Once again the thesis is that the violence and sexual imagery of the game is bound to translate into real world activity, even citing an increase of rape in certain areas to the increase in video game playing. As expected, such theories are not sourced. In a rare show of actual attempts at journalism, several sources close to the games industry have also been quoted.

“[Bulletstorm] ties the ugly, graphic violence into explicit sex acts: ‘topless’ means cutting a player in half, while a ‘gang bang’ means killing multiple enemies. And with kids as young as 9 playing such games, the experts FoxNews.com spoke with were nearly universally worried that video game violence may be reaching a fever pitch.” reads the editorial.

“If a younger kid experiences Bulletstorm‘s explicit language and violence, the damage could be significant,” said Dr. Jerry Weichman, a clinical psychologist at the Hoag Neurosciences Institute in Southern California, told FoxNews.com. “Violent video games like Bulletstorm have the potential to send the message that violence and insults with sexual innuendos are the way to handle disputes and problems.”

“The increase in rapes can be attributed in large part to the playing out of [sexual] scenes in video games,” added Carol Lieberman, a psychologist and book author.

“Between a great ratings system, parental controls on the consoles and the major retailers inhibiting the sale of Mature-rated games to minors, the matter is really one for parents and adults to consider, individually,” said Hal Halpin, the president of the similar Entertainment Consumers Association. “I respect the creative rights of game developers to make a game like Bulletstorm in the same way that I appreciate Quentin Tarantino’s right to make over-the-top movies like Kill Bill.”

Hal Levy with the National Youth Rights Association added, “One thing that tends to be ignored is that if Bulletstorm consisted solely of beating people up, it wouldn’t be fun to play. It’s been praised for encouraging innovative thinking. Bulletstorm involves developing new moves and dispatching of enemies creatively. Plenty of emotionally unstable adults will play the game and they’ll be fine.”

Electronic Art’s response to the editorial can be read here.

Is this editorial another attempt by the media to lump concerns on the video game industry? Or are we in turn being just as alarmist as we project Fox News to be? Chip in on the conversation by leaving your thoughts below!

6 thoughts on “Fox News: ‘Bulletstorm’ Worst Game in the World?”