In an interview with VG247.com, Epic Games art director Chris Perna has revealed the cover art for the third installment in the Gears of War series. The image can be found after the jump.

In the interview, Perna has stated that because the storyline has slowly been taking a more dramatic direction, “we wanted to try to get some sadness in there, but still have that determination. [The characters]’ve been through a lot, especially now that this is the trilogy wrap-up, and we wanted to show the weariness of the characters, to show it on their faces, but not to make them look sad or sorrowful or wimpy. We wanted to keep that resolution.”

The cover also showcases a female character, who will be joining the fight after having fulfilled a more supportive role in the first two titles. Rod Fergusson, who was also present in the interview, stated that the development team was interested in including female characters because “whatever a male soldier can do or have done to them, a female soldier can experience the same: she can chainsaw Locusts in half, and she can get chainsawed in half. It was all about equality and treating them as equals.”

Yesterday, Epic Games announced that Gears of War 3 will be released on September 20th. 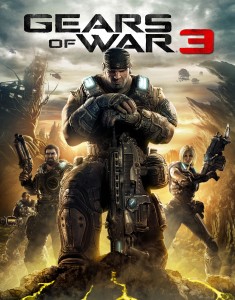