Note: The “Don’t Bother” rating applies to average gamers.  Those who are familiar with the niche market and series should rent it.

The JRPG has stagnated on consoles. Early games in this generation like the Mistwalker titles (Blue Dragon and Lost Odyssey) gave me high hopes, and I quite enjoyed Final Fantasy XIII, but since then, it’s been slim pickings.  It seems that the JRPG is slowly but surely migrating almost entirely to handheld platforms.  That, however, is something upon which I’ll elaborate later—for now, I’m here to review Ar tonelico Qoga: Knell of Ar Ciel, a PS3 exclusive JRPG and the third in the Ar tonelico series.

Developed by Gust, the same team behind the Atelier series of alchemy-based JRPG’s, and published by Nippon Ichi Software (NIS), Ar tonelico Qoga is a boring game that attempts to use blatant sexuality as a substitute for interesting gameplay.  Many parts of the game reek of lazy design, and the sexual content does little to compensate.  Those familiar with the niche market occupied by titles like this, Record of Agarest War, Hyperdimension Neptunia, and many other similar titles won’t mind the sexual content or approach to narrative, but even when that isn’t taken into consideration, the game fails to impress and evolve the JRPG in a way that’s necessary to warrant a purchase. 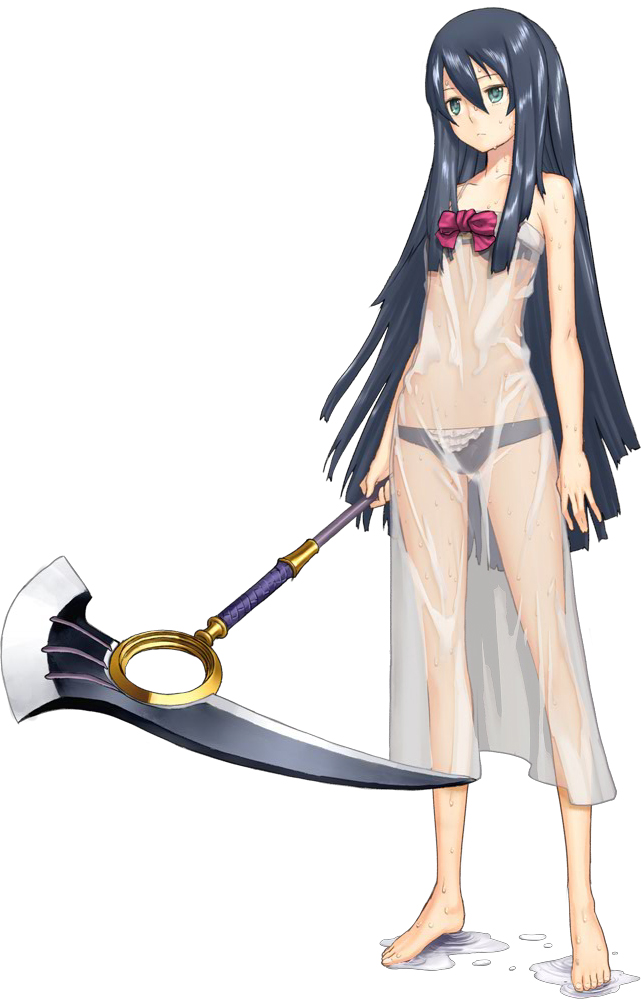 You play Aoto, an awkward anime androgyne who is swept away from his idyllic hometown when he decides to become the bodyguard for the vapid and squeaky voiced Saki, a magical girl known as a “Reyvateil.”  Reyvateils are essentially magical singers with multiple personalities and whose songs help the characters in battle.  It’s all needlessly confusing and it’s 100% in service to Ar tonelico Qoga’s relentless commitment to perversion and sexual titillation.

Allow me to explain.  Reyvateils gain their power from the world; from nature.  Their power increases based on how much skin they’re showing, so the entire point of the game is to build relationships with these girls enough so that, in battle, you can get them to take their clothes off and help you out.  This is where the multiple personalities come in–in her original form, Saki is petite and her various states of undress leave her in tight black shorts that emphasize her camel toe, a set of frilly white underwear, and so on and so forth.  Her other personalities include a more mature and more well endowed alternative, an girl with cat ears, and a warrior woman who seems to be fundamentally opposed to pants.  The other Reyvateil you encounter is a lolita named Finnel, who wears tiny bits of white cloth to cover her small breasts and a two-toned garter belt.  She also has three alternate appearances including the “sweat soaked Soma.”  It’s clear that this is the main selling point of the game seeing as the official website brags in big bold letters that “The heroines strip, revealing their entire body and soul…for the sake of the world” and “the more clothes they take off, the stronger they’ll get.”  Even the male protagonists will “purge,” as the game calls it, exposing the kind of bodies that occasionally lead to transfers within the Catholic church. 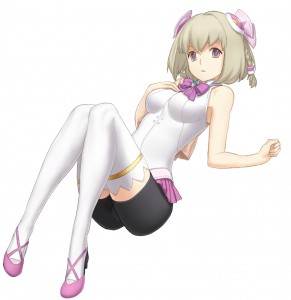 Saki, almost fully undressed. Don't worry. You get to see her strip down completely in the first 10 minutes.

It’s shameless pandering and it’ll amuse (though doubtfully arouse) the target audience but probably creep out most gamers.  I’m of the opinion that games should be allowed to explore and show sexuality, but that it needs to be organic and certainly not the main selling point of a title.  Games like the Dragon Age titles or games like Indigo Prophecy, Heavy Rain, and Max Payne 2 all have sexual content but it’s only included because it makes sense within the context of the game and there’s no reason that video games should be forced to censor that just because they’re video games.

I’m not going on some moral crusade here—this is me venting about games like Ar tonelico Qoga and dozens of ones like it that are little more than softcore pornography with skeletal gameplay and production values that are consistently awful unless some girl is taking her clothes off.  It’s not even the sexual content that makes me angry.  I’d be totally fine with it and all of its excesses if the game were actually fun to play.  But Gust’s priorities are completely out of whack.  If you make a good game first, then feel free to perv it up.  But don’t just throw something together to serve as a vehicle for your female characters.

Naturally, the plot and writing are painful—there’s not an ounce of subtlety and characters flat out say how they’re feeling as often as possible, which is strange seeing as the anime art style can be quite versatile if used properly.  The dialogue can shift from melodramatic to awkward at any moment, and anime fans might be used to this or even enjoy it, but there’s no arguing that it’s a sub-par narrative whose constant sexual innuendos fall flat. 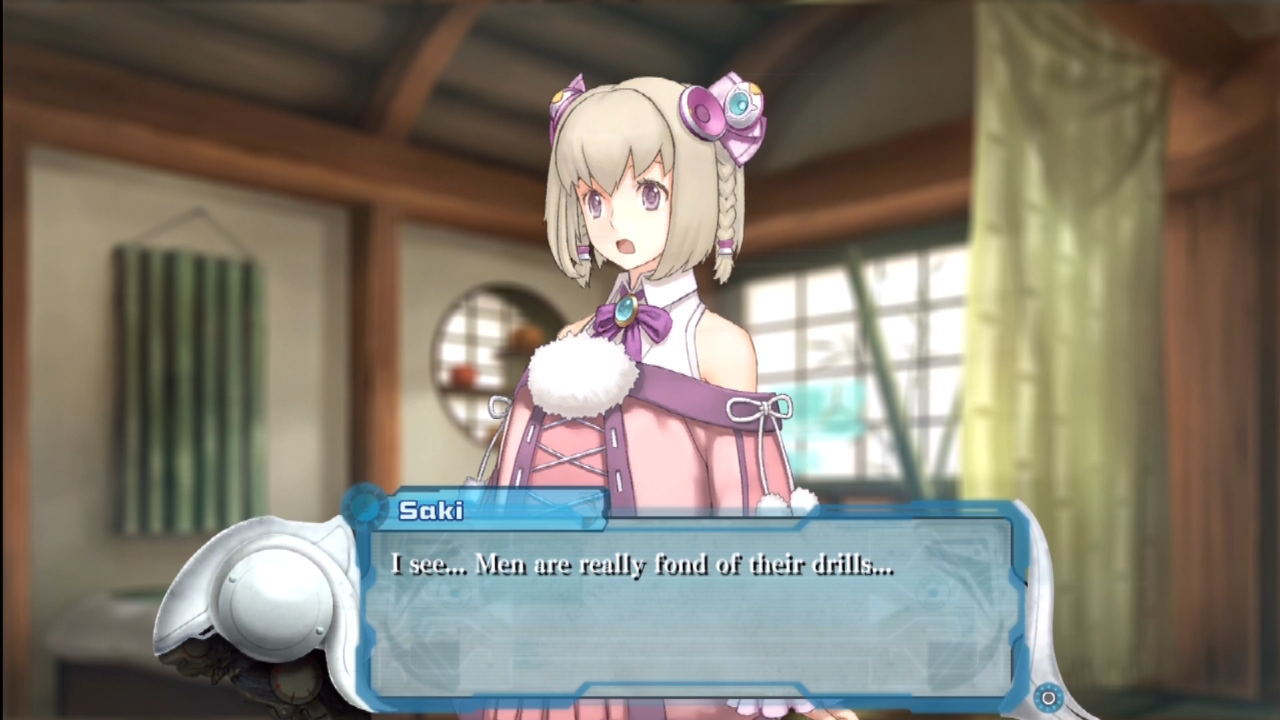 The "wit" exhibited in the game. I suppose it'll elicit some giggles from a few pubescent players.

Gameplay-wise, it’s not much better.  Combat is a passable clone of the standard Star Ocean battle system that puts the party into a battlefield for real-time combat.  You control one party member while the AI handles the rest, and your job is to defend the vulnerable Reyvateil and attack in rhythm with her singing in order to “excite her” enough that she’ll take her clothes off.  It’s the strongest point of the game, but it still pales in comparison to dozens of other JRPG’s out there.  Weapons and attacks don’t really feel powerful and it usually comes down to a kind of rhythmic button mashing.  Exploration involves the same three frames of running animation across a series of largely linear dungeons.  Whenever possible, the developers delegate exploration to a series of drop down menus.  It also includes an item synthesis mechanic, but that’s to be expected from a Gust title.

The “song magic” system is given a bit of depth that allows the male characters to “dive into” the Reyvateils and “compose” different types of songs/magic.  This is helped along by creepy little chibi girls known as “Hyumas,” which represent the emotions of the Reyvateils.  It’s all supported by dating sim-style relationships; the more trust between you and a Reyvateil, the stronger the bond.  The stronger the bond, the stronger she is in battle and the more willing she is to take her clothes off. 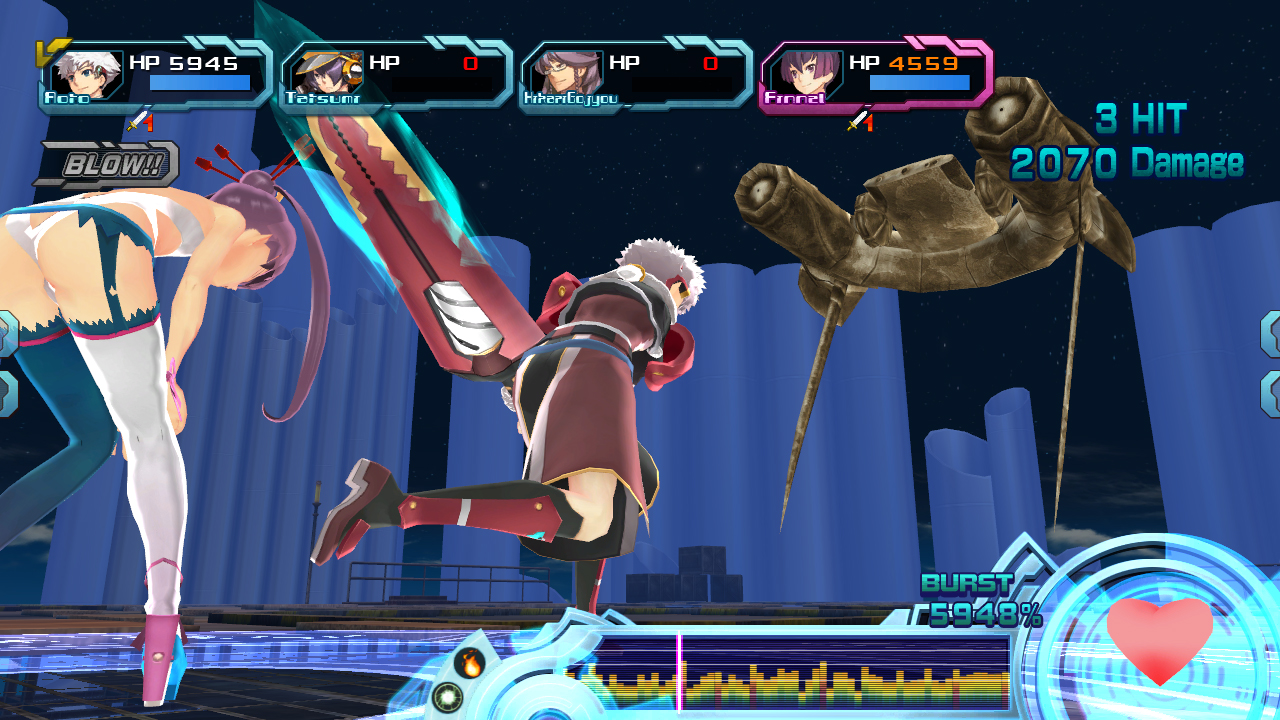 The graphics look like something that should be on the PSP, the music isn’t horrible but it hardly makes it worth playing, and the voice acting is unbearable in both English and Japanese, although with a script like this, the talent of the voice actor is immaterial.  The animated sequences look fantastic, but there are far too few of them.  All in all, the game shows that Gust refuses to evolve.  The previous two Ar tonelico games on the PS2 weren’t half bad.  They certainly fell short of all of the other great JRPG offerings on Sony’s last generation console, but at least they seemed like the developers put some effort into it.  The third, on the other hand, seems unfinished–like the developers realized all of the flaws in the design and decided to try to compensate with sex.  If you’re one of the target audience, you might be able to weather the only passable gameplay and abhorrent writing, but otherwise, steer clear.  If you’re a PS3 owner with a JRPG itch that needs scratching, get on the PSN Store and buy some classic PS1 JRPG’s or go out and get Final Fantasy XIII, Valkyria Chronicles, or Eternal Sonata.