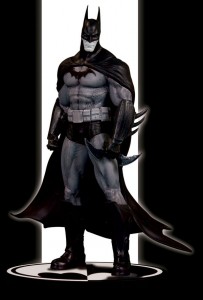 “Batman” has been a smash hit series since 1939, when he made his first appearance. If you are one of the many fans of the series or are just interested in picking up some geeky art, you might want to pick up the Batman black and white statue based off the video game, Batman: Arkham Asylum.

The statue is a re-release which was sold out back in 2010, so quantities are expected to sell out quickly again. The statues will be out in August and will sell for $80.