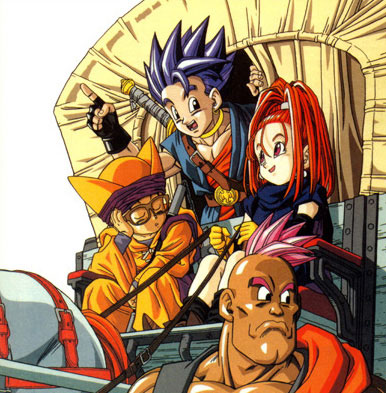 Until now, Dragon Quest VI: Realms of Revelation was the only game in the Dragon Quest series that had not seen western shores. Dragon Quest VI makes its debut on the Nintendo DS, and given the nature of Japanese RPGs developed in the mid 90s, it is as old school as it gets. If you decide to play this game you will undoubtedly spend many hours grinding your levels up through turn based battles, exploring towns and dungeons and building up your characters through various classes. The question is: Is the payoff worth all of the time you will invest in this title? 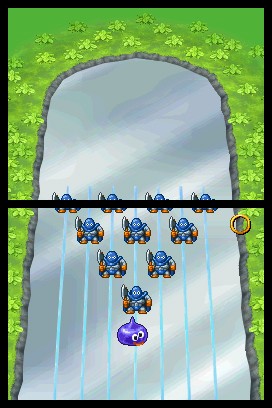 Slime curling/bowling. No I'm not kidding.

Since Dragon Quest VI is a remake of a JRPG released about 15 years ago you can expect a classic turn-based adventure. Just about everything on the JRPG checklist is in this game. You have leveling, a class system, equipment management and random battles that are fought in the “first person” mode you see in games like Earthbound and most of the other Dragon Quest titles. However, the best part about this remake is the fact that there is no touch screen inclusion aside from a filler mini-game you will probably play once and forget about.

Most classic RPGs tell an epic story about a team of heroes embarking on a quest to destroy some ultimate evil. Dragon Quest VI starts off this way and as you progress into the game the story gets more promising. The plot is difficult to explain without giving everything away, but it basically revolves around your party switching between the real world and an alternate dream world on their way to defeat a demon lord because… he’s a freaking demon lord. After you defeat said demon lord you would think the story would end, but that is not the case. Instead, it awkwardly shifts to you wandering from town to town trying to “find yourself” while looking for more evil to destroy. This weird post-story adventure has very little in the ways of character development and because of that the game slows down considerably.

If you’re looking for an upgrade in the graphics department you’re going to be disappointed. While there are some minor tweaks here and there, Dragon Quest VI mostly retains the classic top-down view of most JRPGs released in the mid 90s. Overall that style works for this game. There is a lot to explore in the towns and dungeons and both character and monster sprites look good, although sometimes the characters’ eyes stay open when they’re asleep (just nitpicking). You can also use the L and R buttons to turn the camera, but it’s never really necessary. 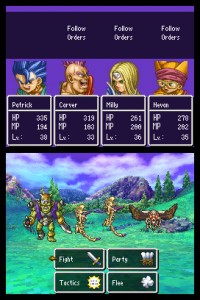 Battles are a real throwback

The music in Dragon Quest is pleasant to listen to… for the first few hours. After that you will start to notice the repetition in the soundtrack and might want to turn the sound down. The sound effects are the typical impact sounds you hear when weapons and magic hit an enemy. The sound is not bad by any means; it’s just not very noteworthy.

As I said before, Dragon Quest VI is your standard classic turn-based RPG. You walk around, get into a random battle and kill the monsters in that battle. However, in order to do that effectively you will need to manage your party, upgrade your equipment now and then and level grind for some of the more powerful monsters. While this seems pretty cut and dry, I had a couple of hang-ups about this system. The first one is the fact that you cannot select specific enemies to attack. You can only select the general group and the game leaves it up to your character to make the choice of which monster to hit. The other small problem is up until right before the awkward story shift I really only had to mash the “attack” button and heal every so often. There was little to no strategy required before that point.

When you get to a certain place in the game you unlock the ability to change your characters into different classes like warrior, mage, and so on. As you win battles with tough enough enemies you gain experience in a class and get new moves for it. When you master enough classes you can unlock new, more powerful ones to train in. You have the freedom to change anyone into anything, but odds are you will stick with what your characters are already good at. For example, you would not make your weak healer into a warrior. This system attempts to add some depth to the game, but I feel like it should have been unlocked earlier so players could have more time to flesh their characters out.

Dragon Quest VI is very straightforward in terms of gameplay, but at times you will be scratching your head trying to figure out what to do next. The game progresses by finishing quests for people and those quests usually involve you going into a dungeon to kill something or find something. Sometimes this goes smoothly, but other times you might miss a certain detail one person said to you at some point in time causing you to interrogate people again until you find that crucial piece of information. It might just be my attention span, but this happened to me a few times throughout the game. 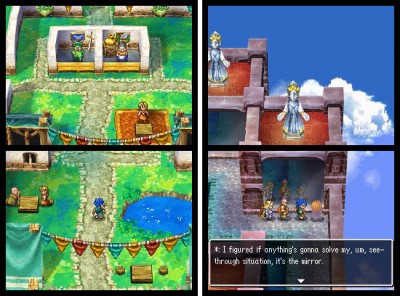 The locations you visit look nice

In the end, Dragon Quest VI will only appeal to die-hard fans of either JRPGS or Dragon Quest in general. While it looks and feels like a classic RPG that most people can enjoy, the story is what really drags this game down. Most players will feel like the payoff they get at the end will not be worth the time invested, and I can’t confidently recommend this title when there are much better RPGs for the DS out there.