I love The Elder Scrolls.  I love delving into online FAQ’s, reading through the inner workings of the game, and using that data to craft the perfect character.  I love planning out every aspect of my hero’s development long before I’ve even shaped them in the character creator.  I love using guides to ensure that I get the best loot from every dungeon and quest.  I love one-shotting enemies on the hardest difficulty with my optimized, godlike avatar.

I’ve been doing it wrong.

Role Playing Games appeal to me as a gamer.  They’re free of the chest-bumping, hyper-competitive nonsense which has plagued multiplayer games since the advent of online gaming and professional gaming leagues (to be fair, gaming has been competitive since the arcade era, but it is much more so today).  Role Playing Games are about creating a narrative – an experience which isn’t dictated in cutscenes but is tailored by your character’s impact on a well-conceived virtual world.  In this way, true RPGs are akin to open playgrounds.  Every trip up and down the slide, every castle built and destroyed in the sandbox, and every scraped knee creates an experience unique to each individual.  There is no right or wrong way to play and no inherent winners or losers.  There is only the act of playing.  And when I was concerned more with stats and level grinding than I was with crafting myself a meaningful narrative, playing is exactly what I wasn’t doing. 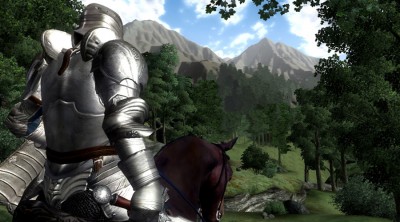 It's beautiful, but it's only what you make of it.

We’re all guilty of it – hitting up the internets to see which item or spell would better fit our characters, which dialog branch we should pick to boost our favor with certain NPC’s, or which quest to hit up next in order to make our lives easier.  And ultimately, that’s what it’s about: making our gameplay experience easier.  By having a trusty FAQ open on one monitor and our game on another, we can prevent ourselves from making sub-optimal decisions regarding our characters.  All this is ok to a point.  But eventually we stop making decisions for ourselves.  We reach a point where we’re scared to make mistakes, scared to experiment, and scared to deviate from the path.  This is when we have to stop and reassess our approach to gaming.

I fell into this trap when playing Morrowind, and again when playing Oblivion.  At first it started as a good-natured desire to understand and exploit the game system.  I would find ways to make absurd amounts of money (re: Alchemy for profit), and then use that money to train my skills up to the limit.  This resulted in hours of crafting potions, selling those potions for profit, tracking down trainers, and giving them massive amounts of money to increase my skills.  The developers at Bethesda sought to prevent this in Oblivion by limiting the number of times a character could receive skill training per level.  Since I could no longer train to my heart’s content, I had to grind in order to raise my skills.

It took dozens of hours of grinding for me to realize I wasn’t having fun any more.  The game was no longer about creating a unique character  – it was about creating the best character.  It was about potions, skill trainers, and how many more times I would have to cast my “Shield” spell in order to raise my Alteration skill.  I ignored the story and the ambiance, and focused on the algorithms and the equations.  Don’t get me wrong, the math governing the game world is important and can be explored and appreciated separately from the game proper – but when the math becomes the game, you have a problem.  When you make a decision based on what’s written in a FAQ instead of what you feel your character would do, things fall apart.  The narrative is abandoned, the immersion destroyed, and the player left with no attachment to their character. 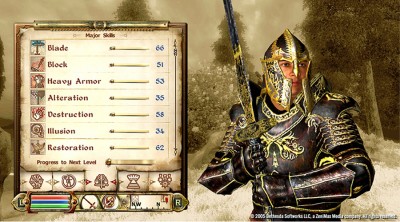 So I allowed myself to make mistakes.  I allowed myself to play as fun characters, to learn by doing and succeeding and failing.  I took part in creating characters like Space Cannibal Abraham Lincoln from our Fallout New Vegas charity marathon.  And the most important thing about those characters?  I remember them.  Space Lincoln was a badass patriot with a rebar club, spaceman suit, and a penchant for feasting on the flesh of his fallen enemies.  He went on to consume the faction leaders of New Vegas and claim their strength for his own, like an ancient warrior feasting on an enemy’s heart to gain his courage.  Space Lincoln kicked ass.

What I don’t remember are all those nameless, godlike characters I made in Oblivion.  I remember most of them were female Bretans, since they had increased magic resistance and mana pools.  I remember that I raised Endurance first for the boost to my health points, and that I took Alchemy as a primary skill for easy levels and Destruction so it wouldn’t be as difficult to grind.  But I don’t remember what those characters were.  I abandoned them just as hastily as I created them.  They were nothing more than a collection of stats into which I poured a ridiculous amount of game time.

I’m looking forward to Skyrim to redeem myself in the eyes of the Elder Scrolls series.  While the internet obsesses over each screenshot and trailer, wondering how skills will be rebalanced and obsessing over everything from the interface to the combat mechanics, I will be thinking up new characters.  I’ll ignore the hype, ignore the trailers, and prepare myself to plunge in with as little knowledge as possible.  I’ll be ready to learn, ready to try everything for myself, and ready to play.  And this time, I’ll do it right.

4 thoughts on “Gaming for the Experience, Not the Grind”