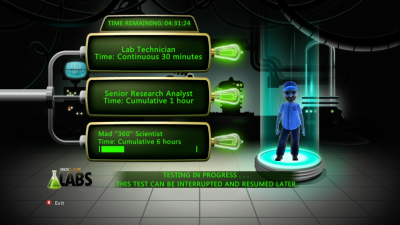 Microsoft recently released the “Xbox Live Labs”, a small application you can download off your Xbox 360 which will “help to improve your Xbox 360 and Xbox Live experience”.

The application will simply run your console through a series of information tests. One for thirty minutes, another for an hour, and the last one running for six hours. The application even warns you that it will burn up a lot of your bandwidth and you can’t run it in the background, so this is probably something best saved for when you’re going to bed. The application is basically collecting basic information like IP address and audio/video setups. Microsoft does warn that users will be the ones charged for usage fees from their Internet Service Provider, but at around 1gb/hour, most players could run the application six hours every day for a month at not reach the average 250 gb/month usage cap.

Doing all three will earn the “brain helmet, a lab coat and crazy mad scientist hair” for your Xbox Live Avatar and another 3 zero point achievements. If you’re interested in helping out Microsoft and getting some free goodies for your avatar, this application is for you.

The “Xbox Live Labs” will end on March 27 and is exclusive to North American Xbox Live users.

So E-G’s, are you glad Microsoft is rewarding you for helping them out for free. Angry that this is only for North Americans? Post your views below!