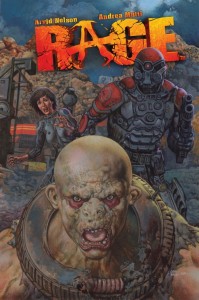 Are you excited for Rage from id Software and Bethesda Softworks? If so, you may want to check out its upcoming comic series. The series follows an unnamed woman’s quest to uncover the lies being spread by the military dictatorship, “The Authority”. The comic book is being written by the creator of “Rex Mundi”, Arvid Nelson. And the interior graphics by Andrea Mutti, who has worked on other comic books like DC’s “Vertigo”.

The comic book series of “Rage” is set for release on June 22 and will have a three issue run, while the game will be released on the PC, Xbox 360, and Playstation 3 on September 13.

Excited to start reading the comics? Or are you tired of seeing comics based off of video games? Let us know in the comments!