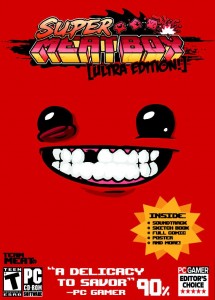 At GDC this past week, Team Meat, the creators of the fan (and Elder-Geek) favorite platformer Super Meat Boy announced the “ultra” edition of the title. Said edition of the game is a boxed version for PC which will contain:

– A 40 page art book containing some awesome pictures of the game, some comics by Team Meat and Super Meat Boy information.

– The original soundtrack to the game and some other audio files.

– A poster of the boxart.

The “Super Meat Boy: Ultra Edition” is expected to be released sometime this April, exclusively for the PC.