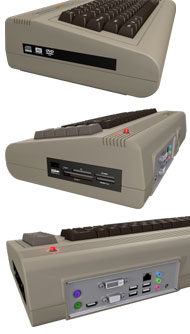 Want a modern computer, but don’t want to give up that classic 1982 style? Well, Commodore is here to help. One of the first initiatives under its new management, the copy is re-releasing its Commodore 64 system, with the guts stripped out and replaced with all the modern conveniences.

The original Commodore 64 came with 64 kilobytes of memory, while the new model ships with a 1.8 gigahertz dual-core processor, an optional Blu-ray player and built-in ethernet and HDMI ports. While Linux is the native OS on the device, other systems like Windows 7 are able to be installed by the owner. The original model sold for $595 back in the early 80s, but the new units will come in multiple SKUs ranging from $250 to $900.

While the old practice of bundling memory, keyboard, and components in one bulk unit has dropped out of vogue in the age of USBs, Commodore is banking on a return to retro glory, not to mention nostalgia. The New Commodore 64 begins shipping at the end of this month.

“Thirty years ago computers were an all-in-one product, with the keyboard, memory and components built inside,” Barry Altman, company president, explained. “Over the years that has changed,  and we believe there is a huge potential to revive the early format.”

“There are a lot of really young computer users who want to own a retro-looking computer,” Altman continued. “And of course there are those 30- to 40-year-olds who owned the original Commodore 64 and want the nostalgia of their first machine.”

Found your new computer, E-Gs? Or is this just another thing from the 80s that shouldn’t come back? Let us know your thoughts below!